So things are good, we are reaching up the coast of the Shetlands, averaging about 9 knots and the wind is 16-18 knots.
We actually dropped the main sail last night, which was sort of always in our plan. From the weather forecast we had even before we started, we had discussed it and decided we would likely need to do it at some point as a precaution.
I was driving just before dark with 25 knots from behind when we were hit by a squall of about 37 knots. At the time we had a reefed jib and two in the main, and were coming off waves at 19 knots. I shouted down to Gavin who was sleeping. We managed to get it down quite well and secured, I had been worried about the head of the sail coming out and whipping around, so we left the halyard in and tied everything.
We continued on with the reefed jib on its own, and the boat was really well mannered with this in the 4 metre waves.

The swell was actually worse this morning as the wind had shifted. We have been hit by about 3 or 4 huge waves over the past 24 hours which just completely swamp the cockpit, so we have to have the companion way completely sealed up and washboard in, and if you are up on deck for even the shortest time to check something you have to clip on ASAP.
We rehoisted the main at 5pm and things have been going well. The boat is doing very well... touch wood the only issues we have had so far are the really small leak, a broken lee cloth and the saucepan has a dent it it after an incident during a breaking wave! 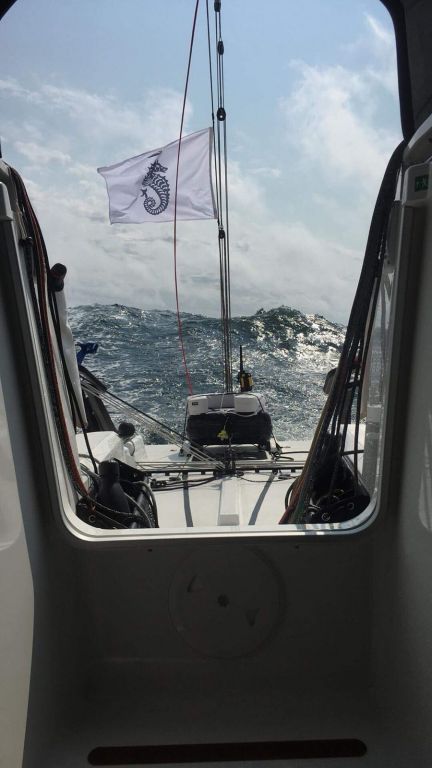