Ten yachts are still racing in the Sevenstar Round Britain and Ireland Race although the next yacht to finish the gruelling 1800 mile race is not expected until tomorrow evening. Over the last 24 hours a low pressure system that arrived from the north west is bringing gale force headwinds that are hampering the progress of the fleet north of the Irish coast.

Roderick Knowles' Class40, Swish, is in the Celtic Sea, 340 miles from the finish and is expected around midnight tomorrow (Tuesday). At their current pace, Swish is almost 24 hours inside the world record for yachts of 40ft or less.

Roderick Knowles sent this message back to the RORC Media Team. "The instruments are playing up so we have no wind readings and we have blown out our gennaker. The good news is we have fixed our fractional kite. All is well, but we are very wet and it has been a tough couple of days, especially on Saturday when we had three reefs in, but now on full main and with that record on our minds, we are pushing when we can!"

Katrin Hilbert's Custom JV52, Hapsa Hamburg, is currently halfway across the Celtic Sea and 300 miles from the finish. Carol Smolawa's JV53, Bank von Bremen, was making good progress this morning having passed Slea Head and making good progress along the stunning coastline, south west of the Ring of Kerry, with 430 miles still to complete.

After two days of rough weather, two yachts are battling it out for class honours in IRC Two. J/111 British Soldier, skippered by Phil Caswell, has made great progress through the night and, after gybing at dawn this morning, they are heading for the north coast of Ireland with just under 700 miles to the finish. J/122 Relentless on Jellyfish, skippered by James George, is 10 miles behind British Soldier but leading the class on corrected time by just one hour. 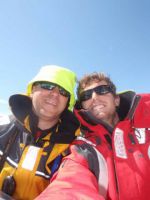 Hanse 53, Saga, skippered by Peter Hopps, is the new leader of IRC One. The previous class leader, Stimpson 42 Palpatine, is still taking shelter in Stornaway. Peter Hopps contacted the RORC Media Team from the yacht 15 miles from St.Kilda, describing the conditions since rounding the top of the course:

"Our trip up to Muckle Flugga slowed as we got closer and we ended up beating round it in quite a light and pleasant breeze. The wind filled in as expected from the SW, before veering NW and increasing to around Force 9. When our third reef pennant broke we dropped the main and have been sailing under headsail only since. You may have picked up a sudden slowing down on the tracker. This is probably a good thing as we have had a more comfortable sail and have put less pressure on everything. Life onboard is a little damp at present, but I'm sure it's a lot better for us than for some of the others. The hand-hold we rigged up in the saloon is now also doing duty as a clothes line. Looking forward to our beef stew for dinner." 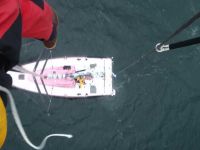 Ian Hoddle's Figaro II Rare, with crew Conrad Manning, sought shelter on the west coast of the Isle of Lewis last night. This morning, the two-handed team are back on the race course having contacted the RORC:

"Yesterday things started to get serious out here and, with a Force 9 predicted, we decided to take cover. Things have been very mad; with two reefs in the main and the storm jib there were times when we were both afraid," commented Conrad. "I went up the rig to fix the wind wand, but still no joy, which means we will be doing it the old fashioned way. We have just left Lewis in good spirits and flying towards the next mark, feeling slightly drier, but not for long!"

At 0930 BST Werner Landwehr, racing his German Figaro II, Dessert D'Alcyone, two-handed with Heiner Eilers, is north of the Isle of Lewis with 885 miles to go. Liam Coyne and Brian Flahive, racing First 36.7 Lula Belle, are approaching St.Kilda, 800 miles from the finish. Both yachts experienced strong winds through the night which have abated somewhat this morning.

The general weather outlook for the western coasts of Scotland and Ireland, and the Celtic Sea, is that the north westerly winds will prevail, but high pressure is due to arrive from the mid-Atlantic by tomorrow, bringing lighter westerly winds.