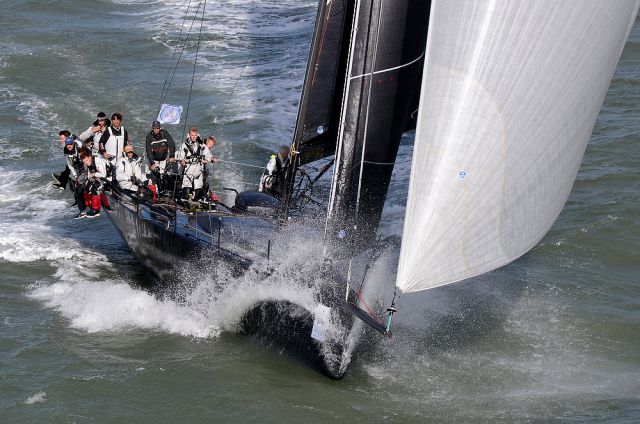 The Royal Ocean Racing Club has declared Jens Kellinghusen's Ker 51, Varuna (GER), as the overall winner under IRC of the 2014 Sevenstar Round Britain and Ireland Race.

Race sponsors Sevenstar Yacht Transport have also awarded Jens Kellinghusen with a $20,000 voucher to ship Varuna to their selected destination worldwide, which will be used to transport Varuna to Malta to take part in the Rolex Middle Sea Race, the final race of the RORC Season's Points Championship.

Although six yachts are still racing, none of them can better Varuna's corrected time racing under IRC. Jens Kellinghusen was quick to praise his crew for their performance, Varuna has no powered winches and the tough conditions required tremendous physical exertion and long hours hiking out on the rail.

"The weather conditions really suited Varuna. Our biggest competition was with the canting keel boats, which would have preferred reaching, but the downwind conditions towards the end were ideal for us. I am so happy for the crew as they all did a great job and the boat held together in some testing conditions. I am very pleased, this is the first time we have participated and we really enjoyed the race. We already use Sevenstar for transporting Varuna, so the $20,000 from the sponsors is very much appreciated."

At 0900 BST Friday 22 August, the remaining six yachts racing in the Sevenstar Round Britain and Ireland Race are experiencing downwind conditions in plenty of breeze. J/122, Relentless on Jellyfish, skippered by James George, was just 38 miles from the finish holding off a strong challenge from the Army Sailing Association's J/111, British Soldier, which is six miles behind the on-the-water leader. Both yachts are expected to finish this afternoon.

Hanse 531, Saga, skippered by Peter Hopps, passed The Lizard at midnight. At 0900 BST, Saga was 30 miles from Portland Bill with 100 miles to go. Saga is expected to finish the race around midnight on Saturday 23rd August.

Just after midnight last night, Ian Hoddle's Figaro II, Rare, passed Liam Coyne's First 36.7, Lula Belle, as the Two-Handed teams approached the Scilly Isles. At 0900 BST Rare had extended their lead by 11 miles to lead on the water as the two yachts passed The Lizard. However, after time correction, Lula Belle is still the leading the Two-Handed Class by a considerable margin. Werner Landwehr's Figaro II, Dessert D'Alcyone, was 70 miles from the Scilly Isles, 300 miles from the finish.

Liam Coyne, skipper of Lula Belle, contacted the Royal Ocean Racing Club in the early hours of this morning. The Irish pair of Liam Coyne and Brian Flahive have been racing for 11 days surviving gale force winds, but fatigue and gear failure is taking its toll. Lula Belle's engine has failed to start, essential to charge their batteries, and the sails are showing signs of the battering they have received.

Without access to the fleet tracking player on the RORC website, Liam was unaware that Rare was passing them, as Liam Coyne wrote this from Lula Belle, while at sea.

"Day 10 (I think). Winds filled in quicker at Mizen Head than we expected. Thank God we still have the A5 kite and she was great today. With no electronics on board we don't know speeds, but we are flying. We expected Rare to rocket past us today, so we were going fast to hold him off. We are now 10 nm from the Scillys and we took the A5 down as it was getting to hard to hold. Lucky we decided to, as there were two more areas needed sewing which our "MacGyver" on board Brian duly did. Handy to have such a multi tasker. We hope when we round the next mark we might get one more spin out of the A5. It's literally hanging on by a thread.

"On a lighter side the other night we had a show to remember. As anyone who sails knows there is an algae in the water, which when disturbed by the boat's wake causes it to light up. On a really frustrating watch where the sky was pure black it was almost impossible to helm. At night we usually pick a cloud or star to follow. A night with black clouds and little wind is exhausting. I was nearly in tears with frustration when the dolphins showed up. We see them every day but this night I presume it was the black sky but they were lit up white (from the Algae) and not only were they illuminated they left a 20' trail of illuminated water after them. It looked like the Red Arrows doing synchronized swimming. For 30 minutes I forgot about the Boat went and sat at the mast and watched the show of a lifetime. All day we see them break water but here you could see them underwater darting here and there. Sometimes 3 abreast going left, right left right over and over in perfect harmony leaving the illuminated trails in their wakes. It was an unbelievable sight. Nice of them to cheer a sailor up on a tough night."