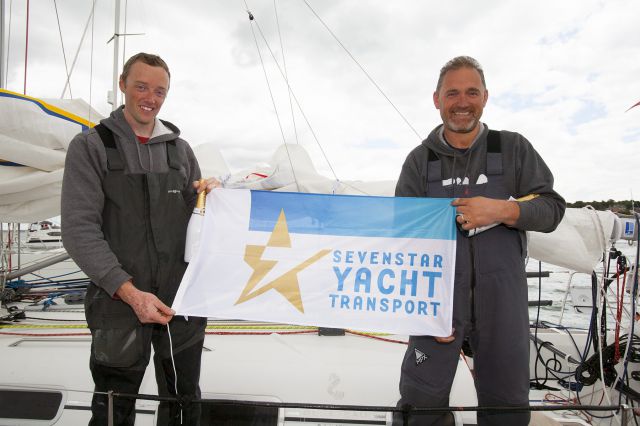 Before the 2014 Sevenstar Round Britain and Ireland Race, a Two-Handed team had never completed the 1800-mile course. However three teams from Ireland, Britain and Germany have now accomplished that magnificent achievement. Racing Two-Handed around Britain and Ireland requires all-round skill, great seamanship and tenacity. Most of the time, the Two-Handed pair are alone on deck. Whilst a team mate sleeps, it can be a lonely existence on deck and the lack of sleep and the effects of exposure to the harshest of conditions is bound to take its toll on both yacht and sailor.

Liam Coyne's First 36.7, Lula Belle, with Brian Flahive as crew, finished the Sevenstar Round Britain and Ireland Race at 11:40:54 on Saturday 23rd August in an elapsed time of 12 days 02 hours 40 minutes 54 seconds. The duo won the Two Handed Class and the combined IRC Three and IRC Four Class.

Five days ago the Irish First 36.7, Lula Belle, with Liam Coyne and Brian Flahive racing Two-Handed was off Dingle on the West Coast of Ireland when Liam reported that they had lost the use of their engine. With 500 miles still to go, Lula Belle had no means of generating electricity and were considering retiring from the race. The team had shredded two of three spinnakers and damaged their mainsail, but they never gave up:

"We had serious doubts that we could finish this race," admitted Liam dockside. "When the engine went, we didn't think there was much more that could go wrong, but at the end of the day, this race is an endurance test for yourself and the boat; that is what it is all about. Brian and myself have done two Fastnets and two Round Irelands but there is no comparison. This race is the hardest we have ever done. We took a hammering for a couple of days but you are 12 days at it, battling for two hours at the wheel, taking two hours rest and then you're back at it again. To rest when you are off watch, you have to put complete trust in one another and myself and Brian have 100% confidence in each other."

"Fair play to Liam and Brian - that's hard core and their efforts show the true spirit of Two-Handed racing. Liam and Brian have normal jobs but their achievement is just as great as the professionals and in many respects, the sacrifices they have had to make puts their achievement even higher. I wish them huge congratulations on finishing the race and their magnificent result."

"Damian Foxall is a big idol to us, someone we look up to and it is really nice to get that compliment from him. There were more than a few memorable moments in this race, but when the engine was gone, we lost everything, even our windex was jammed. The only way to tell the wind direction and speed was the Sevenstar battle flag on the backstay! However we said to each other people have gone a lot further with nothing, so we kept going. We made up some nav-lights with a head torch and a lens over it and two torches taped onto the transom and a head torch each and that was it. We were cautious around the Scilly Isles because we had no electronic navigation, just the chart and a compass. Liam and myself would like to thank the Harbour Master at Cowes for giving us a hand to get to the mooring after we finished and also to Rare, for cheering us over the finish line. Right now, we have a long jobs list, but top of it is definitely to eat a good steak and chips."

Ian Hoddle's British Figaro II, Rare with crew Conrad Manning completed the Sevenstar Round Britain and Ireland Race just after 0900 BST on Saturday 23rd August 2014, taking Line Honours for the Two Handed Class after almost exactly 12 days at sea (elapsed time: 12 days 0 hours 18 minutes 09 seconds). No Two Handed team has ever completed the race before and with a water-line length of just 32 feet, Rare is also the smallest yacht to ever complete the race.

Ian Hoddle has been raising money for CLIC Sargent all season. The charity has been providing care for his five year old nephew James, who was diagnosed with an inoperable brain tumour last January. The plight of his young nephew, bravely fighting the disease, has been a big influence on his determination to finish the Sevenstar Round Britain and Ireland Race.

As Ian Hoddle stepped ashore with adrenalin coursing through his veins, he was very emotional about the cause that had kept Rare on the race track:

"We had taken photos of James on the boat and the delay to the start meant we could take them up to him in the hospital, which was great. During the race we found out that he had been released from hospital and was going home, which was great to hear. When that first storm hit and started to pull bits off the boat, it got a bit scary but I was remembering why I was out there. It was a tough time. I remember being in the teeth of a gale at 4 o'clock in the morning with just the storm jib up, falling asleep on the helm, but I was continually reminding myself about James and what he was going through to keep us going. I am a bit emotional at the moment," said Ian with the tears welling up. "Apart from one spat, myself and Conrad have become better friends than when we started and considering we have been on a 32 ft boat for 12 days, we have done well to keep each other going the whole time. We lost the autopilot days ago and we have sailed the last 900 miles hand steering the boat. It was a bloody hard race."

Ian's crew, Conrad Manning counts ballroom dancing and ironman competitions amongst his interests. "When people hear that I am racing on a pink boat and into ballroom dancing, they think I have completely lost my mind, which I probably have, but dancing is a great way to chill out," commented Conrad. "I love the Viennese Waltz but the last 12 days have been more like a jive and a jitterbug and a bit of everything thrown in. I have the Welsh Ironman in about three weeks time and I'm aiming for 12 hours which is a bit shorter than 12 days!"

Ian Hoddle and Conrad Manning have raised over £6,000 for CLIC Sargent. If you would like to donate to their cause: https://www.justgiving.com/Rare/

Werner comes from Helgoland and is 71 years of age: "In four years, we will start this race again and I hope we will be better," commented Werner. "I have taken part in many races, The Fastnet, Round Skagen and many more, but this was the hardest race of them all. We are very tired now but we are happy to have finished the race and we are looking forward to a cold beer.

"We lost all electrical power and decided to retire and sailed 120 miles back towards Edinburgh, but as we arrived there, we gave the battery one more try and it worked! We had to sail 240 miles to get back into the race and there was no way we could make that up. When we were rounding Muckle Flugga it was very cold with a lot of wind, maybe 45 knots and gusting more and the waves were very big."