Change of Course: Amendment to the Sailing Instructions 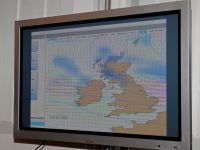 1700: Cowes, Isle of Wight: At today's Skipper's Briefing for the Sevenstar Round Britain and Ireland Race, the Royal Ocean Racing Club (RORC) announced a dramatic change to the race.

Due to a severe weather forecast for the west coast of Ireland for Thursday 26th August, the RORC have decided to reverse the course so that the fleet will race anti-clockwise around Britain and Ireland. The start remains unchanged from the Royal Yacht Squadron line to the east at 14.00. This should give the fleet a fast running start towards the forts in the Solent.

Andrew McIrvine, Commodore of the Royal Ocean Racing Club explains why the club took the decision:
"The reason for changing the course is consideration for all the competitors. We have been monitoring the weather models for the last few days and they are all in agreement that a deep depression will be arriving to the west of Ireland at the same time as most of the fleet will be there. The RORC weather advisor Mike Broughton, believes that this will bring wind speeds of at least 40 knots, possibly as much as 50 knots on the nose. Worse than that, as the wind direction changes over 180° as the low passes through the sea state becomes very confused. Although the boats are very well prepared, these conditions could cause damage and retirements and the west coast of Ireland has very few places offering shelter. By going east about, the boats will avoid the worst of the depression and the confused sea state and will have far more shelter opportunities as there will be several ports that the boats can go into should they decide to do so."

The Sevenstar Round Britain and Ireland Race starts tomorrow at 1400 from the Royal Yacht Squadron Line, Cowes, Isle of Wight, England.

Sevenstar Sponsor The Round Britain And Ireland Race 2010

Sevenstar the specialist yacht and motorboat shipping company sponsored the race in 2006. Managing Director Richard Klabbers, one of the competitors in the race, is delighted that RORC are running the race in 2010. "The 2006 race was one of the toughest tests I have experienced in my sailing career and also one of the most fulfilling," said Richard.

The fully crewed non-stop race covers 1760 miles and is open to IRC, IMOCA 60s, Class 40s and Multihulls who will race clockwise around Britain and Ireland, starting from the Royal Yacht Squadron line in Cowes on the Isle of Wight. The diverse international fleet will attract seasoned RORC members as well as less experienced sailors. The race is a "must do race” for serious offshore sailors and will be a real challenge.

RORC Chief Executive Eddie Warden Owen is delighted with the initial interest in the event. "Even at this early stage interest has been received from Mike Slade with his 100 foot super maxi, ‘ICAP Leopard’, Karl Kwok from Hong Kong with his Farr 80 ‘Beau Geste’, and from the USA, Jens Kuehne in the Reichel Pugh 48 'Sjambock'. The 2006 winner 'Chieftain'. the Cookson 50, will also be competing. The boat is now called ‘Lee Overlay Partners’ and the new owner Adrian Lee has already had success in winning the inaugural RORC Caribbean 600.” The last race attracted 25 entries but the RORC anticipates a bigger entry in 2010.

Enquiries are open for the race starting on Monday 23rd August 2010 via the Royal Ocean Racing Club: www.rorc.org

94 days and counting: It's 14 weeks until the start of the fully-crewed non-stop 1760nm Sevenstar Round Britain and Ireland Race - organised by the Royal Ocean Racing Club (RORC) and 22 yachts have confirmed their participation with a number focused on the opportunity of breaking both the fully-crewed race record set by the IMOCA 60 Artemis Ocean Racing in the 2006 race (7 days 4 hours, 29mins) and the course record set by Dee Caffari and Sam Davies on Aviva in 2009 (6 days 11 hours and 30mins).

Leading the charge is Mike Slade's 100' super maxi ICAP Leopard: "There is no doubt that this race is one of the toughest on our sailing calendar," said Mike Slade as he waited for a weather window to launch an assault on the west to east monohull Transatlantic sailing record. "August can throw up all sorts of weather and if a high pressure system descends upon the UK, all bets are off for a record breaking run, even though the 100' Leopard is potentially much faster than the IMOCA 60 in which Jonny Malbon (Artemis Ocean Racing) and Dee and Sam set their records."

Pushing Leopard hard will be a number of Volvo Open 70's: From Spain, Telefónica Blue, a competitor in the 2008/09 Volvo Ocean Race will be skippered by Olympic Gold and Silver medallist Iker Martinez: "We are really happy to be taking part in the Sevenstar Round Britain and Ireland Race, a challenge with a history that spans over 30 years and to be competing with Telefónica Blue. There's no doubt that it is going to be wonderful to race with boats from other classes, sailing a new course for our boat and for most of the crew. To sum up, it's a great honour for us to join in this great celebration of British and Irish sailing." 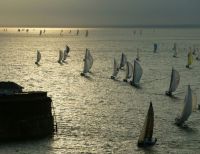 The Royal Ocean Racing Club (RORC) announced today the introduction of a Two-Handed Division in the non-stop race around Britain and Ireland, sponsored by Sevenstar starting on Monday 23rd August from the Royal Yacht Squadron in Cowes.

RORC Racing Manager Ian Loffhagen commented: "We have been receiving a lot of interest and enquiries from competitors who wanted to race double handed in this non-stop challenge, so have made the decision to open it up to enable them to race alongside the fully crewed boats. They will race for the Rebel Maid Trophy."

"Originally we did not have a Two–Handed Division in the race out of deference to the Royal Western Yacht Club's two handed (stopping) Shetland Round Britain and Ireland Race. However when they reached their entry limit the RWYC kindly told us that they were happy for us to open our race to two handed boats."

"The Sevenstar RBI will be the most challenging race of the RORC season for the two handed fleet and we are hoping that it will appeal to the Class 40 fleet in particular. However because of the timing of this announcement the race will not be part of the Season's Points Championship for the Two–Handed Division. It is a stand alone challenge and it will be a big one at that!"

Tactical weather expert, Mike Broughton, will be giving a full weather briefing on Sunday, prior to the start of the Sevenstar Round Britain and Ireland Race. Mike has competed in the race himself as well as over a dozen Fastnet races and just about every blue ribbon yacht race in the world.

"On Monday morning, the light northwesterly should back to the southwest, just before the race start, bringing brighter weather. The fleet will be running on mainly a starboard gybe towards the Forts, as they head east out of the Solent," predicts Broughton.

"Outside the Solent, the fleet turn west and should be beating into about 15 knots. This southwesterly breeze should be stable, in speed and direction through Monday evening. Tuesday morning, the wind should veer northwest and decrease to about 8-12 knots with leading boats around Land's End. By Tuesday afternoon, a ridge of high pressure from the southwest will bring lighter westerly, then northwesterly winds."

"For the moment, we look like completing the race in about seven days," commented ICAP Leopard boat captain, Chris Sherlock, which would be outside the race record. "But if we get 24 hours of running conditions, that can dramatically change the overall picture. We certainly think that there is still every chance we can break the record, everything is still to play for."