As we round Dover, look at those white cliffs, we realise that its the home straight and soon we will have dry land under our feet.
It's also the time where the crew are reminiscing about the race, retelling stories and maybe having a moment of reflection.

It's certainly been a race of 2 halves with Muckle Flugga as the half way point. 1st section was breezy, with big seas, strong winds and a few setbacks. 2nd half, light airs, wind-holes and again a few set backs. BUT as a crew we have pulled together when needed, kept each other going, laughed ALOT and certainly learned more about each other than we thought possible.

So as we face our final night watch, mobile phone signals are working, calls to loved ones made and excitement about that first beer felt. Personally, I can’t wait for a shower, beer and burger.

I would like to think that we will all walk away from this race, with a little more knowledge of ourselves, sailing and a few more friends. I certainly have. Highlights for me are:
Getting to know (typhoon) Alan, as I’ve nicknamed him.
Sitting on the rail with Henry and Heidi discussing favourite movies, pet hates and generally anything else.
The early morning Dolphin show and just being able to say I completed the Round Britain and Ireland Race.

With that I bid you farewell, see you in cowes for a beer. Jennifer OUT.

Some images received from EH01 as they approach the final leg of their journey; 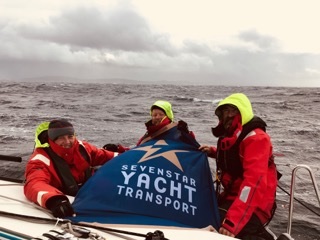 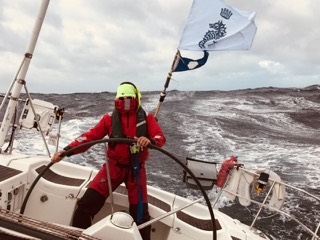 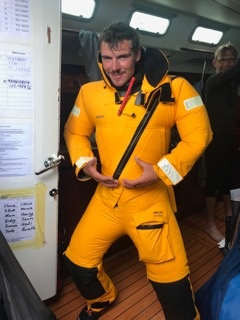 Crew member on GBR5936R Game On

By 3am Monday morning we had got through the oil rigs of the northern part of the North sea. Passing them close last night is always a fascinating sight, mini towns on stilts, all lit up and with burning gas plumes being expelled from high towers.

By early morning we had crossed from Scotland to England as we continued to head south. We are over 100 miles away from the coast line, so the UK is currently invisible to us beyond the charts. Most of today the wind disappeared and we were becalmed in the sun, very frustrating times but we ended up pulling away from our nearest competitor who was visible most of the day.

As I type this it’s currently 2.45am, very dark with heavy rain, 15 knots of wind. Ollie is off watch and asleep.

With about 400 miles to go we are now in the final quarter of the race. We will pass the longitude of Manchester today - hello VMB Manchester team !!

The home straight we will be achieved when we turn West at Dover but still a way to go yet. As you may have seen the bad weather has taken its toll on the fleet with many retirements due to gear failure and some minor injuries. It’s always a balance to not push so hard things get broken, a marathon not a sprint for 1800 miles. "You got to be in it to win it" is never so true.

So final big push now to maximize our result. We are second in double handed, the leader has two professional sailors aboard who were part of the winning Volvo Ocean Race team - Dongfeng ( it’s sort of the equivalent of you racing your car against Lewis Hamilton to put in perspective) so we are very pleased with our performance so far.

I keep reflecting on the support from the entire team and partners to raise the Scope donations - remarkable achievement from so many people. Awesome job and makes you proud to work with such great people and organisation. 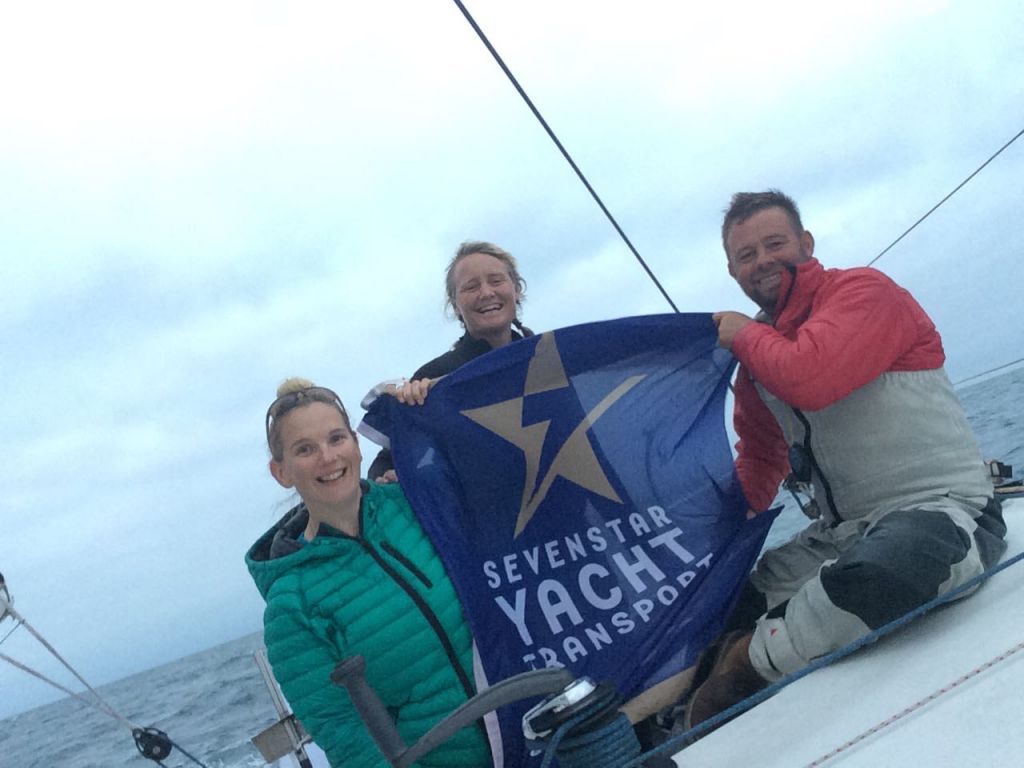 It’s been a difficult few hours on Aparito but after much soul searching and number crunching we are going to have to announce our retirement.
Those of you who know a bit about Dr Elin Haf Davies will be aware she is the founder and CEO of Aparito, a start up tech company working to support remote patient monitoring using emerging technologies. Elin is passionate about everything she does and always takes the big challenges head on, whether it’s offshore racing or growing her company.
At this moment in time her company needs to take priority and we have finally come to terms with the fact it won’t be possible for us to finish this race in time to meet her business commitments. So we will be pulling in to Eastbourne to drop her off .

It’s gutting and we’ve had 24hrs of heartache trying to make the right decision.
We entered this race expecting to make up the numbers and have some fun. We had an ancient class 40 and a crew of 3.
After 10 days of racing, laughing and enduring the multiple personalities of the British summer weather it is incredible to be lying 4th in class and 6th line honours with only 50 miles to go.

Of course this has been a war of attrition but who would have thought old tubs would still be in it?

We are incredibly proud of what we’ve done.... so we won’t get an official result but as we said at the very beginning of this experience... there is a lot more to yacht racing than just the results. The Seven Star Round Britain and Ireland race has been spectacular. Thank you to RORC race committee and Congratulations to everyone still out there slogging away. It’s a tough race and you are tough sailors! Respect!

Port watch here reporting on the latest news from EH01. The main story tonight is the day has finally arrived when the snack drawer has been replenished. Yay and double yay! Needless to say all the “good” stuff (chocolate and crisps) went early on last week as we battled the elements and the past few days we have been snacking on healthy things like mango and raisins, and our fruit locker of apples and oranges (nutritious but a bit boring!). But now the new chocolate, biscuits and crisps have been “released” to the crew and there was nearly an inter-watch mutiny over a bag of cadbury dairy milk giant buttons!!

In non food related news, it has been an interesting few days of sailing; conditions have been tough but in a very different way from those we experienced towards the end of last week. Sunday’s light winds were welcome respite after the strong winds at the top of the course but they brought their own challenges. Navigating North Sea oil installations (which were both imposing and stunning) with a boat under spinnaker in light winds made for a tricky first few hours of night sailing as the 500m exclusion zones around the installations (and the harsh penalties for infringing those zones) meant that we had to be extra careful of our gybe angles and helming. It was a “two watch” night for Port watch on Sunday, and we thought our second watch would be “plain sailing”....we were wrong!! In the tricky light winds at three o clock in the morning we managed to get some quite spectacular spinnaker “wraps” around the forestay. At one point it looked like we were going to have send Julian (the FM) up to release the halyard. Luckily for us, with some skillful “sail whispering” by Gareth and helming by Julian, we got the wraps out to get under way again.

Monday was a frustrating day for all aboard EH01. The wind vanished and we had to bob around trying to find breeze lines on the water. Port watch had afternoon watch (12- 6) and as we waited for the wind to appear the crew found various ways to pass the time including fishing off the back of boat and taking apart the cooker to clean it (which is a sign of just how bored some crew were!) . We all breathed a collective sigh of relief when around 7pm last night we managed to get under way (largely on apparent wind) and could start counting down the miles to the next way point.

Today (Tuesday) has seen us cross back into English waters and we are now sailing down the East Coast towards our next mark off Norfolk. Today’s wind has been fairly fickle: the weather files suggested that we would encounter another wind hole off the top of England which caused collective groans from the crew. No one on board wanted to spend another day like Monday and with that in mind, we spent the morning trimming the sails carefully and vigilantly monitoring crew position on the “high side” (some members of the crew more militantly than others!) all in the hope that we could maintain our boat speed. Unfortunately late in the afternoon we “hit” the wind hole and had another few hours of slow progress but that gave the starboard watch the opportunity to clean the decks. So far (luckily) that hole has been “short lived” and we are back under way.

The repairs to the main and the pole are holding well and all aboard are well.On Sunday, the crew were surprised by “halfway there” party bags some of which contained play-doh and various members of the crew have been modelling bears, elephants and other animals from the play-doh when sat at the nav station. Special mention goes to FM Julian’s recreation of our course, complete with outlying islands, wind bars and a model EHO1. Picture to follow.

In terms of the fleet, we are mindful that we are “in the middle; we are chasing down those boats which overtook us on Saturday and in turn the boats behind us are chasing us. In short, its all still to play for (except the giant buttons which Port Watch are currently enjoying).

Team Aparito coming up for air at Great Yarmouth!

The North Sea has certainly thrown everything at us. Sustained 45-50 knots at the top and nothing in the middle.

It’s been emotional. Beat from Shetland was full on, you don’t see that much wind that often.

We’ve had no weather info for the whole North Sea sea as file got accidentally deleted in the mayhem . So stuck close to rhum line which seemed to pay off.

We’re astounded that Tubs (our boat) is still holding onto her position. North Sea is now playing nicely, 12-15 knots and sunshine with the usual nasty chop.

We’re bringing the old girl home, just one more corner to go. Hang in there Tubs!