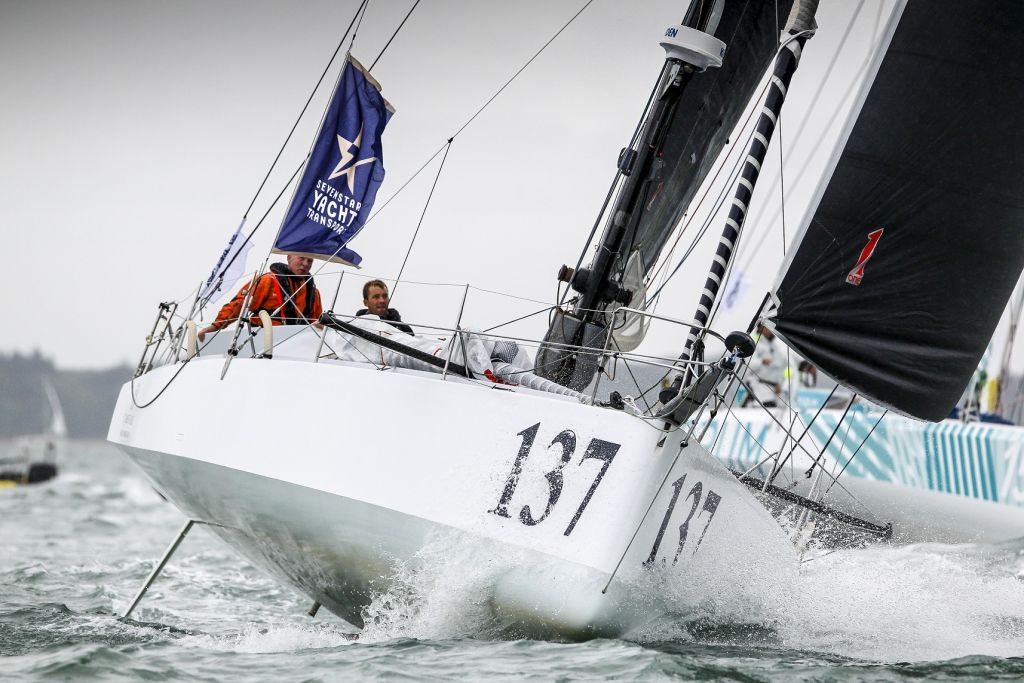 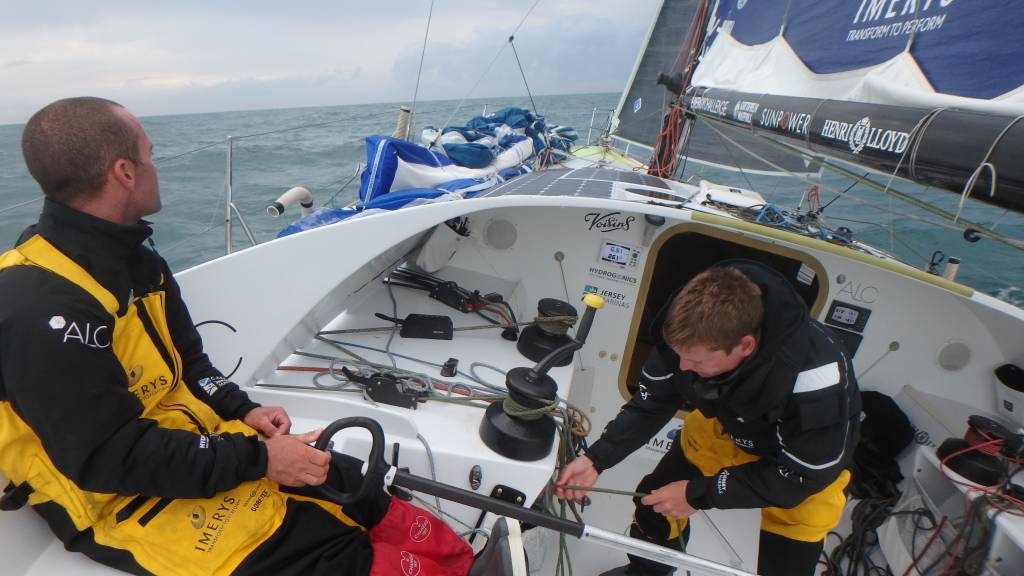 "Since the start it has turned into a great battle at the front of the Class 40 pack between Corum (Mach 3), Phorty (Mach 2 sistership) and us. Nothing like some wind and rain to see us off, as a bit of a warning shot that we are not cruising the Med and have some uncomfortable conditions ahead," Phil Sharp's Class40 Imerys Clean Energy © Phil Sharp Racing

After an impressive start, Guillaume Le Brec's Class40 Oman Sail reported a broken backstay on day two and has retired from the race. All crew are safe and well.

Ben Schwartz & Chen Jin Hao's Figaro 2 El Velosolex SL Energies Group is leading IRC Two-Handed on the water and after time correction. The Chinese and French sailors became friends as part of the Dongfeng Race Team, winning the 2017-18 Volvo Ocean Race. Their Figaro 2 is the smallest yacht in the Sevenstar Round Britain and Ireland Race. Ben Schwartz contacted the media team on Monday 13 August:

“Twelve knots and sunshine, the mood is good on board and we are trying to dry out from the very wet conditions at the start. British Soldier (Army Sailing Association) is our immediate competitor, which is sailing very well; as soon as there is a bit of pressure they are faster than us, but we are trying to match them for speed. Right now we have good conditions and we can push harder, but when the strong wind arrives we will need to sail in a more secure way.” 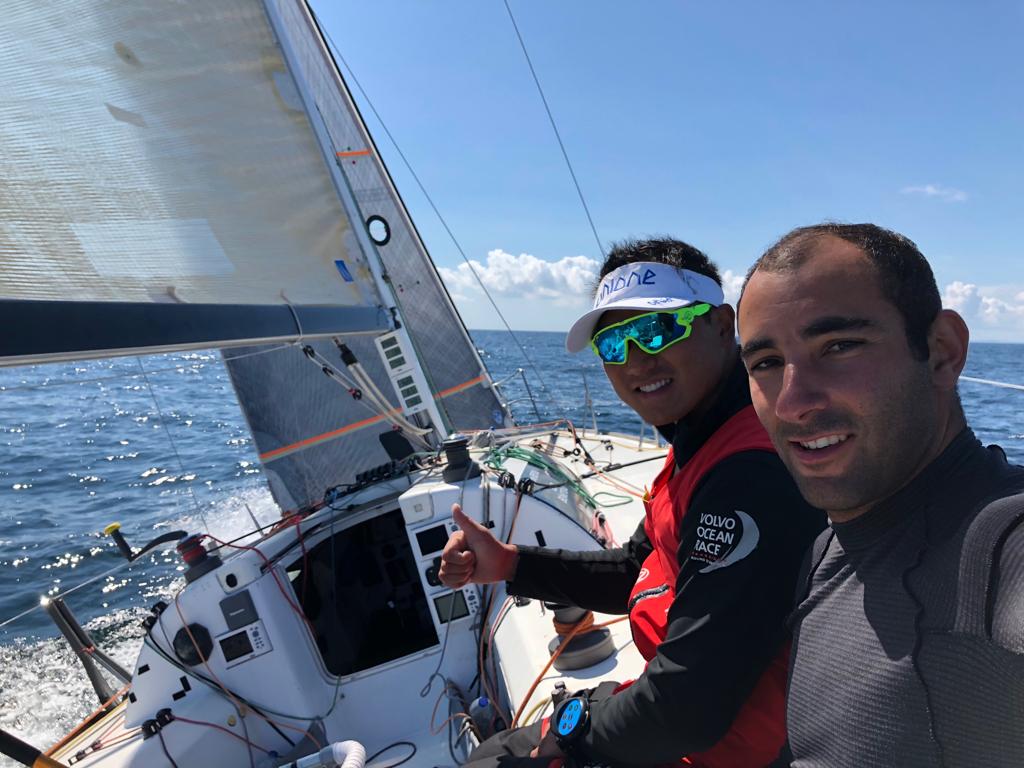 A selfie from the race course: The Chinese/French duo are competing in IRC Two Handed in the smallest boat in the fleet. Benjamin Schwartz and Chen Jin Hao on Figaro El Velosolex SL Energies Group © El Velosolex

The most southerly of the fleet is Conor Fogerty's Irish Sun Fast 3600 Bam! At 0900 BST the Two-Handed team altered course to the north. They are followed by Gavin Howe's British Sun Fast 3600 Tigris, which is also racing Two-handed. The two teams will be hoping for the wind to shift to the west as they negotiate the Celtic Sea. 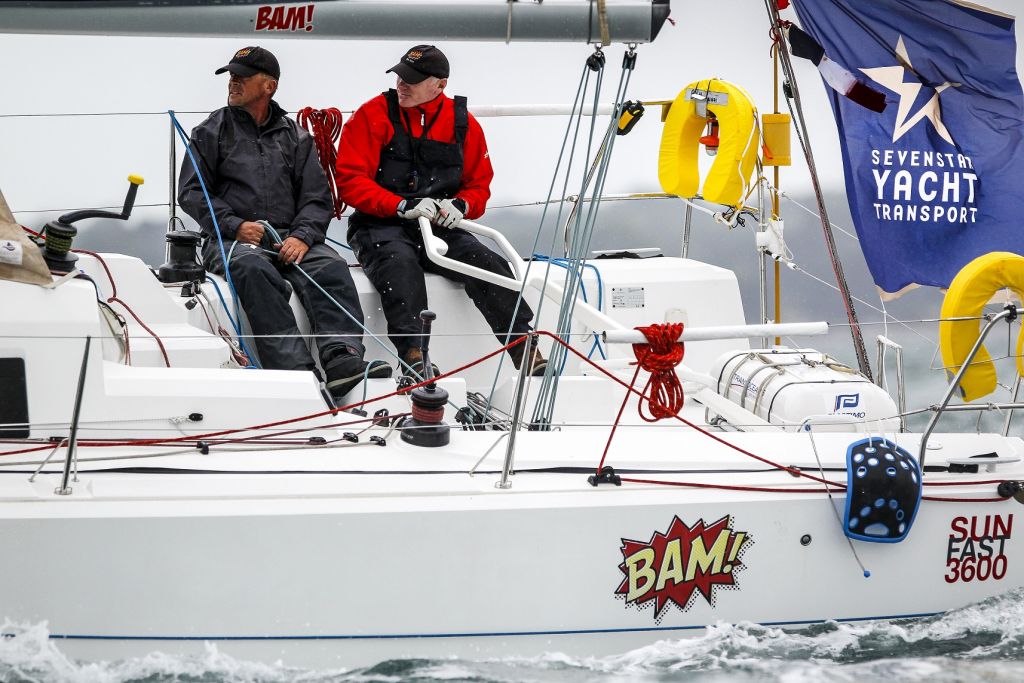 In IRC Four, Charlene Howard's AJ Wanderlust has an engine problem and headed into Mylor Harbour near Falmouth and hopes to rejoin the race. Charles Emmett's Sigma 36 British Beagle leads the class.

Several teams have reported sighting dolphins around the Scilly Isles. Pascal Bakker on board Junique Raymarine Sailing Team caught Common Dolphins on camera breaching in the bow of the boat. 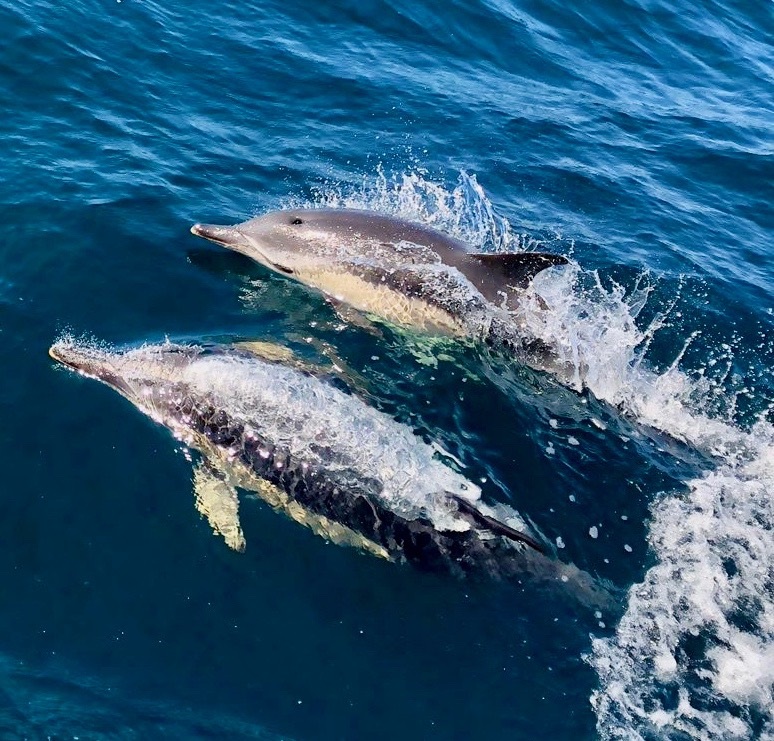 Whilst racing, crews are treated to some spectacular marine life and Pascal Bakker on board the Dutch J/122 Junique Raymarine Sailing Team captured these wonderful dolphins breaching in the bow of the boat © Pascal Bakker