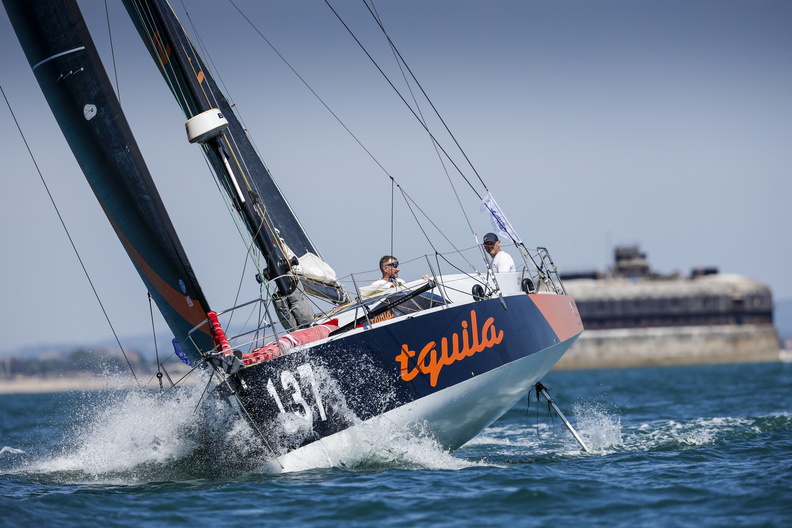 Leaders past The Lizard

The boat speed has ramped up in the Sevenstar Round Britain & Ireland Race with the two IMOCAs in the race wicked up and closing in on The Isles of Scilly. The Class40s are yet to taste full downwind conditions but are expected to round The Lizard early this afternoon. The fully crewed boats in IRC One are following the Class40s line looking to stay relatively inshore. The big tactical battle on the morning of day two is in the Two-Handed fleet with a number of boats heading offshore rather than following the boats ahead.

Oliver Heer Ocean Racing, skippered by Ollie Heer hung onto the line honours lead until The Lizard. Pip Hare’s Medallia took a slightly more offshore line during the first night and caught up with their rivals and then smoked past them after The Lizard. The breeze is up and the 125 degree wind angle is the sweet-spot for Medallia’s foils, which has now seen boat speed increase to over 15 knots on the YB Tracker.

Antoine Magre’s Palanad 3 has powered to the front of the Class40s and is about an hour from rounding The Lizard. Six miles astern is James McHugh’s Tquila, followed by Andrea Fornaro’s Influence and Greg Leonard’s Kite. 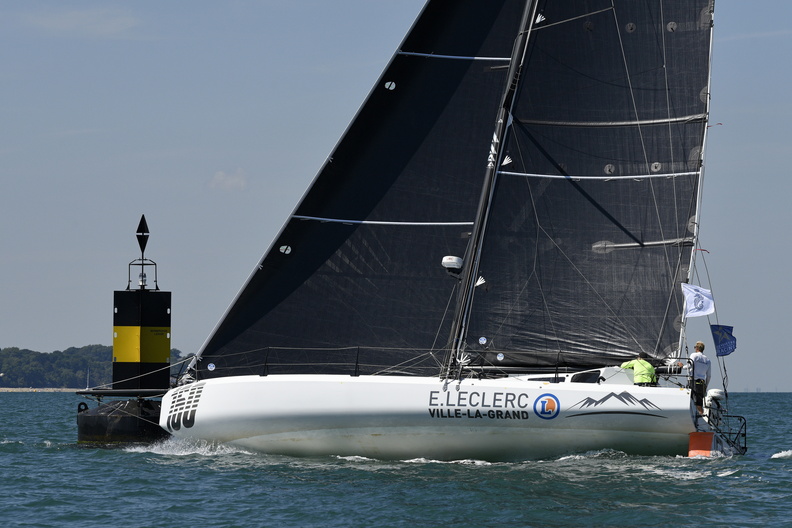 Brian Thompson, navigator on Tquila checked in on the first night: “Fascinating racing since the start and the boat is going very well in these conditions. Tonight is beautiful with the sunset and the moon rise…the boat is doing 10.5 SOG now that the tide is finally in our favour! Making up for the scores of tacks against the tide along the south coast of the Island near Ventnor.”

The HVS’ JV52 Haspa Hamburg, skippered by Christian Heerman is three miles ahead of their rivals, the SKWB’s JV53 Bank von Bremen, skippered by Christoph Tschernischen. However, under IRC Haspa Hamburg rates higher than Bank von Bremen, which leads the duel after IRC time correction. Marie Tabarly’s 73ft ketch Pen Duick VI has picked up speed as the French team get into better breeze and is 80 miles from The Lizard. Sun Fast 3600 Fujitsu British Soldier is in good company. The British Army Sailing Association team has sailed south of the rhumb line and is mixing it up with a number of Two-Handed teams including Gavin Howe and Maggie Adamson on Sun Fast 3600 Tigris. 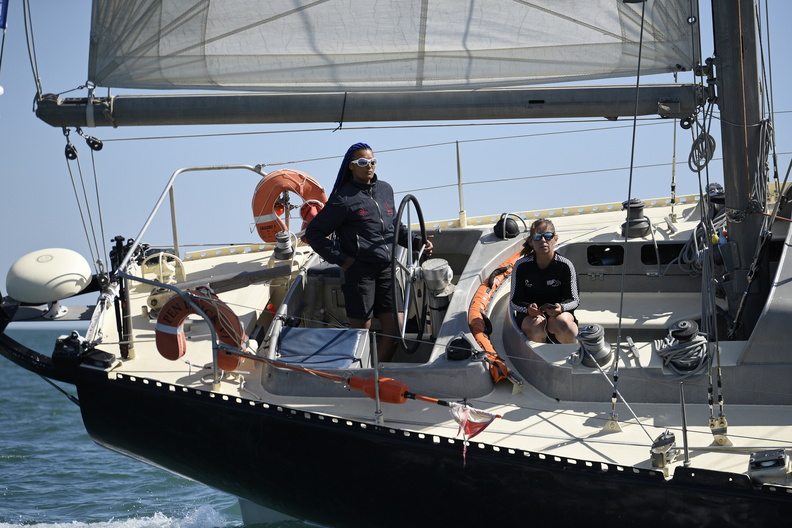 Marie Tabarly at the helm of Pen Duick VI with 12 on board including Vendee Globe skipper Alexia Barrier © Rick Tomlinson/https://www.rick-tomlinson.com/ 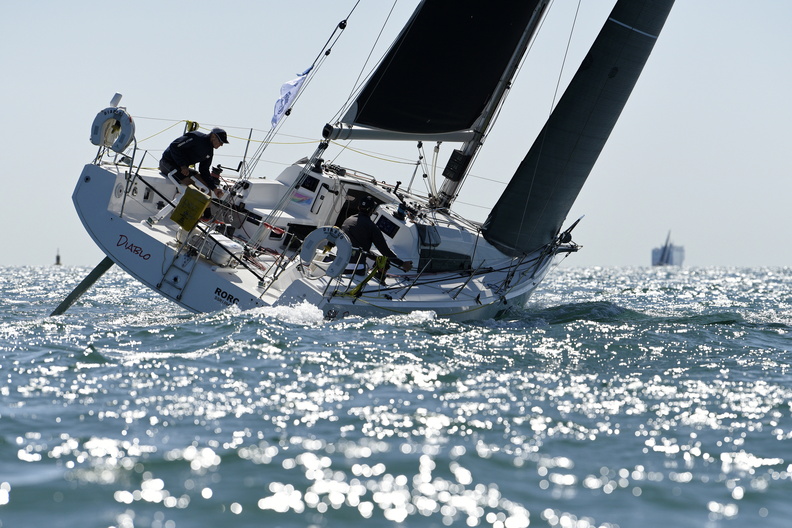 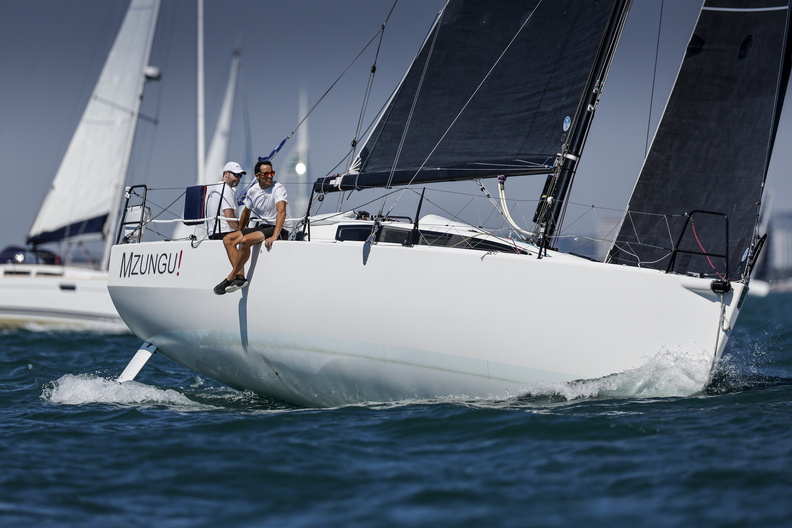 Sam White and Sam North on board Mzungu! © Paul Wyeth/pwpictures.com

Sam White checked in from on board Mzungu!: “A busy day and night onboard Mzungu! We set ourselves the target of leading the double-handed fleet around St Cats and after getting our tides wrong at the start found ourselves with a lot to do to make that happen! We had good boat speed up the Solent and were eating away at the others before a short tacking duel with Tigris up the Ventnor coast saw us pop out in front at St. Cats, marginally in front- just! Nice pressure overnight meant a much faster passage towards Start Point than expected. Overnight we went from an upwind sail set to jib and staysail, then onto the Jib top, jib and staysail, then Code Zero and staysail. We now have the A2 flying with the spinnaker staysail. Passing Start Point now having just made a double espresso Americano with cream on a beautiful sunny morning! Life at sea!!”

Weather forecasts are showing less wind inshore and potentially more wind and a better angle offshore, but will south pay? The YB Race Tracker will reveal all later on the second day of the Sevenstar Round Britain and Ireland Race.