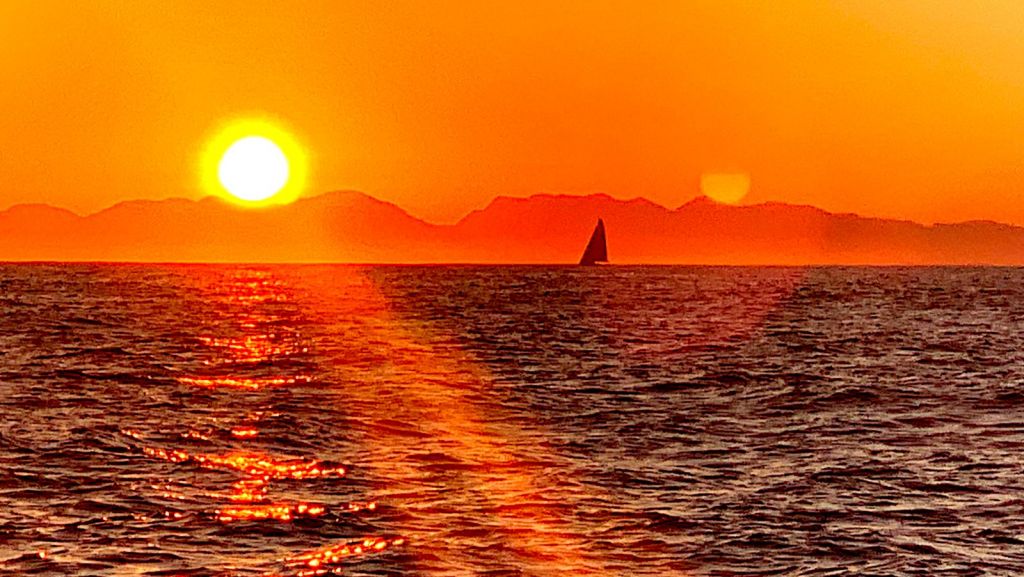 After nine days of racing 21 teams are still competing in the Sevenstar Round Britain & Ireland Race. All bar three of those teams have rounded St Kilda, the isolated Scottish archipelago in the North Atlantic. Pip Hare’s IMOCA Medallia has rounded Muckle Flugga, the most northern extremity of the course. The international fleet is forecast to experience low pressure for the first time in the race; a building northerly wind is expected to arrive tonight. After nine days and nights of sweltering heat and little wind the teams are preparing themselves for stronger winds to come. The majority of the teams are past the midway 900-mile waypoint and there is optimism for a faster second half of the race.

Pip Hare’s IMOCA Medallia was the first boat to round Muckle Flugga on the eighth day of the Sevenstar Round Britain & Ireland Race (14th August 17:09:33:31). Described by Medallia’s watch leader Paul Larsen as the ‘Cape of the North’. The crew of Medallia were elated to be finally turning south and looking forward to the possibility of fast downwind conditions in the North Sea.

Joy at rounding Muckle Flugga - Listen to Pip as she talks about the complicated weather systems and life on board: https://youtu.be/-7GZlZFm2tE

“We are very, very happy to see that bit of land!” commented Pip Hare shortly after rounding Muckle Flugga. “We never would have imagined it would take so long to get up here. It has been challenge after challenge and meteorologically it’s still very complex for the rest of the race. We are looking forward to hooking into low pressure and getting some miles underneath us but the weather is still looking really complicated. This has always been a challenging race and that is why I entered it, but this weather takes it to another level.”

Morning After leads overall and IRC 3

Stuart Greenfield’s S&S 34 Morning After maybe the oldest boat in the race but on the ninth day the team are leading overall and in class after IRC time correction. Only the IMOCA Medallia has raced more miles than Morning After in the last 24 hours. Currently the biggest threat to Morning After is fellow IRC Three competitor Jangada, which is approximately 20 miles ahead on the water. Jangada look to have found more wind and are racing at double Morning After’s current speed. 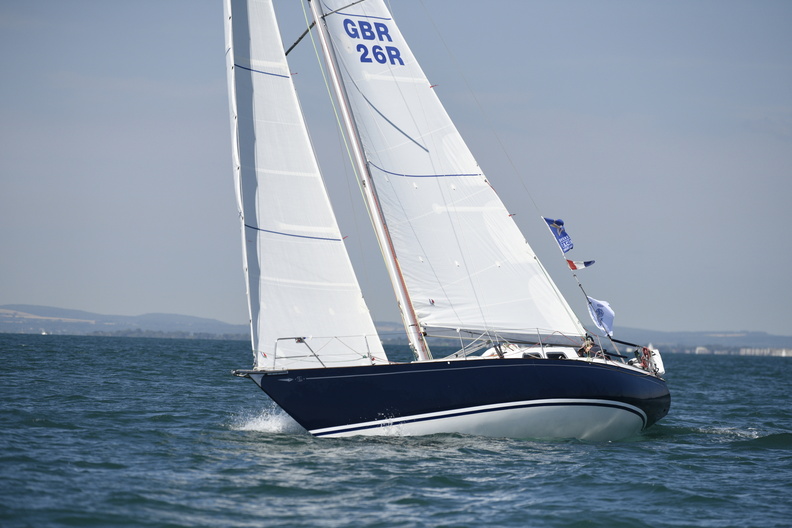 The battle of attrition was expected for the record number of teams racing in IRC Two-Handed. After nine days at sea, 13 teams are still racing and the top seven on the water are just 10 miles apart. The joy and pain of getting ahead or falling behind is there for all to see in the official Live! Blog with messages coming in from the boats: https://roundbritainandireland.rorc.org/live

Richard Palmer on board Jangada described the joy of taking the lead for the IRC Two-Handed fleet: “The approach to St Kilda was challenging. Ahead of the front there was an area of low cloud with little or no wind. We managed to navigate our way through the maze and pop out ahead of the Sunfast 3300s at St Kilda and take the lead in IRC 2-handed. A hugely satisfying moment after days of relentless concentration. But we have no doubt that the leaderboard will change over the coming days with the change in conditions. Just grateful to be with the peloton at this stage. As we now pass Eilean Mor on our way to Muckle Flugga conditions couldn't be more different. Up to 20 knots, close hauled in a short choppy sea. Very unpleasant by contrast. It looks like we will have to endure this hardship for a day and a half until we round Muckle Flugga, then ease sheet and run for home.”

Deb Fish on board Bellino sent in this report via satellite phone on the way to St Kilda: “The last few days have felt rather like a light airs training camp; four boats in a tacking duel in super shifty wind. I suspect we were all relieved when the wind veered and we could all settle on starboard tack for a while.”

Nick Martin reports ‘depressing times on the happy yacht!’ from on board Sun Fast 3600 Diablo, racing with Cal Finlayson: “Unfortunately after rounding St Kilda the forecast wind didn't show up. For eight hours we sat totally becalmed. We have worked so hard to get here over the past few days and to find the gold pot at the end of the rainbow doesn’t exist is depressing beyond words!” 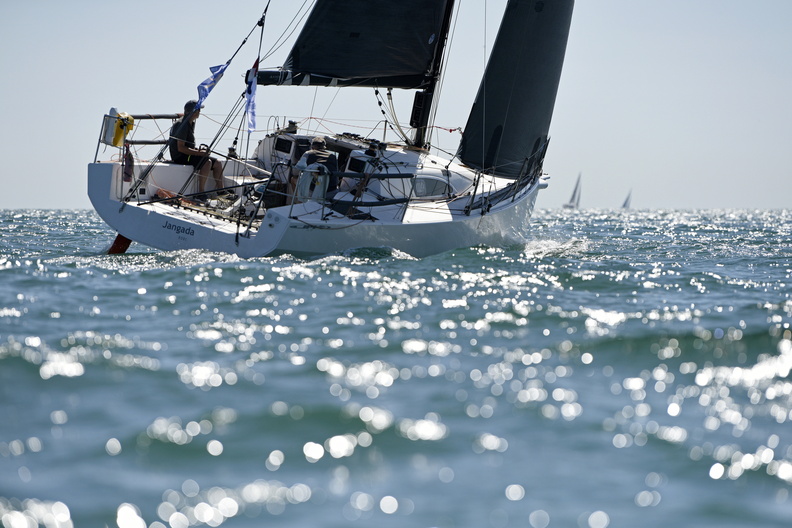 James McHugh’s Tquila was leading the Class40 Division at Black Rock, over three hours ahead of James Stableford’s Mussulo 40 and Greg Leonard’s Kite. With a windless area ahead, Tquila went offshore looking for breeze, followed by Mussulo 40. However, Kite stayed closer to the rhumb line. The light airs battle ensued for 200 miles to St Kilda with the three swapping the lead on numerous occasions. At this morning’s 1000 BST update Kite and Tquila were both 30 miles from St Kilda achieving 10 knots of boat speed. Tquila was once again further offshore than their Kite. Mussulo 40 has fallen behind by about 16 miles, achieving only half the boat speed of their rivals. After St Kilda the Class40s will ease sails and head north east. With a building northerly breeze the angle of attack for Muckle Flugga will be crucial. 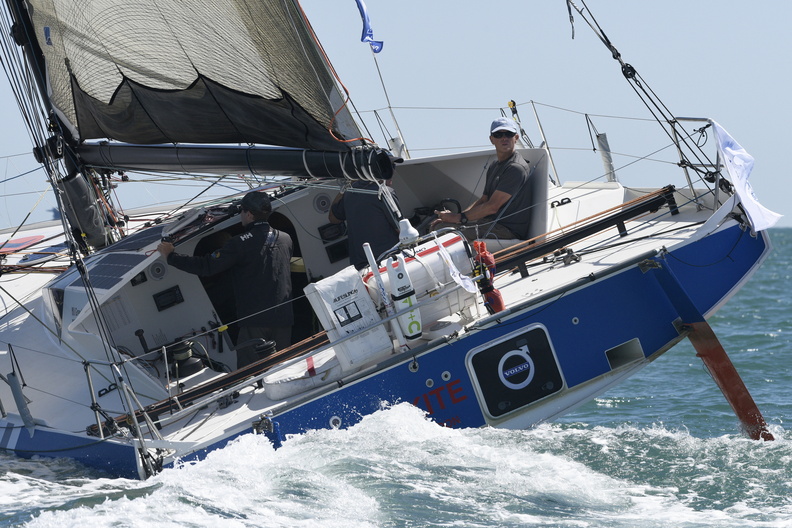 At 1000 BST on day nine of the race Greg Leonard's Kite and Tquila were both 30 miles from St Kilda achieving 10 knots of boat speed © Paul Wyeth/pwpictures.com

Just two teams are left racing in IRC One with retirements from Bank von Bremen, Haspa Hamburg and Pegasus of Northumberland (all due to time constraints). Leading on the water is Danish Elliott 35 Palby Marine, skippered by Michael Møllmann. Forty miles astern is Marie Tabarly’s Pen Duick VI. However, the famous French 73’ aluminium ketch has found good wind and has covered more miles than Palby Marine in the last 24 hours. Pen Duick VI is ranked as IRC One leader after time correction.

“We finally have some wind and everything is fine on board. We are moving our big boat as fast as we can, but it’s not easy!” commented Alexia Barrier from on board Pen Duick VI. “We are so looking forward to getting to the Shetlands and finally going fast downwind!”