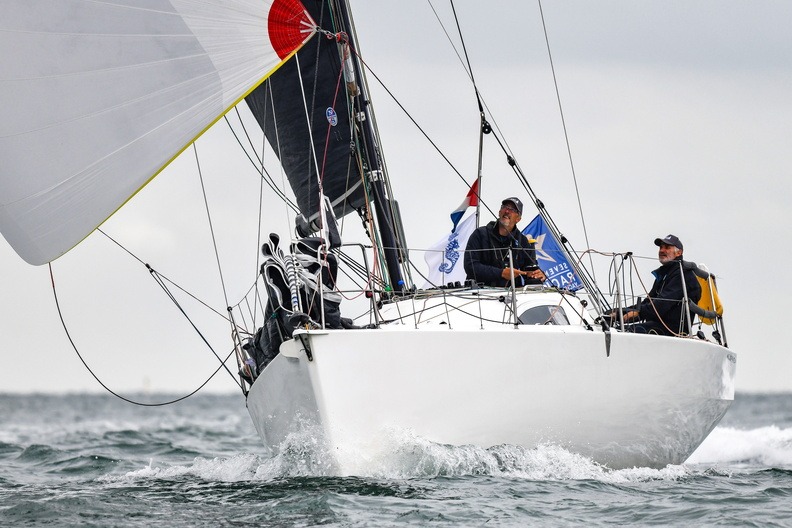 Triumph through guile and determination

While near gale force winds and big seas were experienced by just about every boat, this edition was notable for light airs racing. With wind speed ranging from zephyrs to near gale, using the IRC Rating Rule to determine the overall and class winners was an ideal measure. A race where guile and determination were the keys to a top performance. The IRC Rule uses fixed number time correction, meaning that competitors where aware of their ranking throughout the race and could formulate their strategy and tactics accordingly.

The Sevenstar Round Britain & Ireland Race came to a thrilling climax on the 16th day when 10 boats finished within a 14-hour rush hour. Rob Craigie’s Sun Fast 3600 Bellino, racing Two-Handed with Deb Fish was the first of the pack, pipping Sam White & Sam North racing JPK 1080 Mzungu! to the line by just 10 minutes. Bellino set the best IRC corrected to beat for the boats that followed. In a dramatic final twist to an intense and highly complex race, the overall winner was decided by the thinnest of margins.

“Just a full-on race with absolutely no let-up and the pressure was always on. Mentally it was totally exhausting, but great fun with really close competition,” commented Jangada’s Richard Palmer. “This race really is the pinnacle of offshore racing because it offers absolutely everything; close racing on the IRC ratings and the race track has plenty of headlands, tidal gates, all with weather systems that are constantly changing. This race just throws everything at you; it tests you to the limits.” 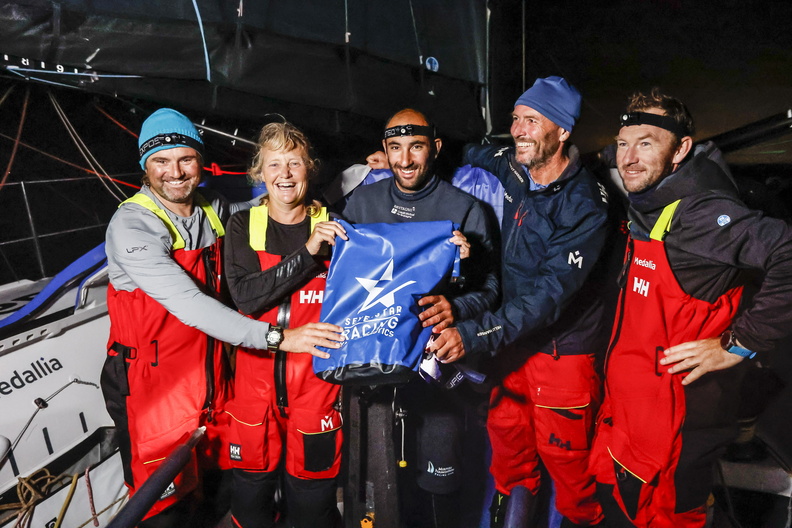 Pip Hare’s IMOCA Medallia took Line Honours in the Sevenstar Round Britain & Ireland Race on the 11th day of the race. The IMOCA Class was expected to be four boats, but with two teams not making the start line and Oliver Heer Ocean Racing having to retire due to an injured crew member, Medallia was the only IMOCA to finish the race. While high pressure meant that the elapsed time was way outside the race record, Pip Hare was upbeat about the race:

“It is not often I go into a race wanting to take line honours, but that really was a goal, so we are very happy,” commented Pip Hare. “We were gutted that Ollie Heer’s IMOCA had to pull out as it would have been a great competition. Medallia is a newer generation boat but Ollie’s is more suited to light airs. We concentrated on trying to extend from the other boats in the race and get around the course as quickly as possible. I'm very, very proud to have my name against line honours in this edition of the Sevenstar Round Britain and Ireland Race. I have full admiration for everyone out there; this is a tough race for all of us, but the first cold beer when you cross the line makes it all worthwhile!” said a jubilant Pip who, in a show of massive support for the Two-Handed warriors in the race, took family and friends out for a RIB-ride to greet teams as they finished the race many days after Medallia had completed the race. 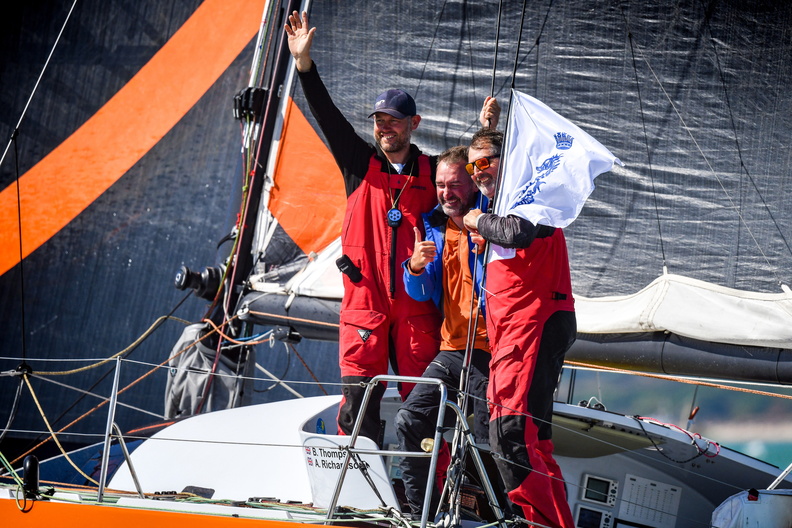 James McHugh’s Tquila won the Class40 Division taking just over 13 days to finish. Class40 racing is a new discipline for McHugh who has been competing for many years at the highest level in the one-design Etchells Class. However, Tquila’s crew was the multiple offshore world record holder Brian Thompson and world champion multihull specialist Alister Richardson.

“It was a fantastic race but very long,” commented James McHugh. “This is only my third Class40 race and it is a very different discipline to Etchells sailing. Brian and Richard have been putting me through my paces to get up-to-speed. They are great sailors, really intuitive. It has been wonderful to do this race with them and work as a team. For me going around the Shetlands was something special; it is an incredible landscape.”

“It was a very tactical race,” commented Brian Thompson. “We made a big gain after Muckle Flugga which was unexpected as we had blown up our fractional halyard and had to do the leg with a jib in a lot of wind, but we ended up in a better position and got through a key high pressure ridge. I have never seen so little wind on this course, but it did keep the whole fleet really close.”

Runner-up in the Class40 Division was Greg Leonard’s Kite, racing with his 18 year-old son Hannes, plus the highly experienced round the world sailors; Mike Golding and Miranda Merron. Completing the podium was James Stableford’s Mussulo 40 with a crew all from the Isle of Wight. 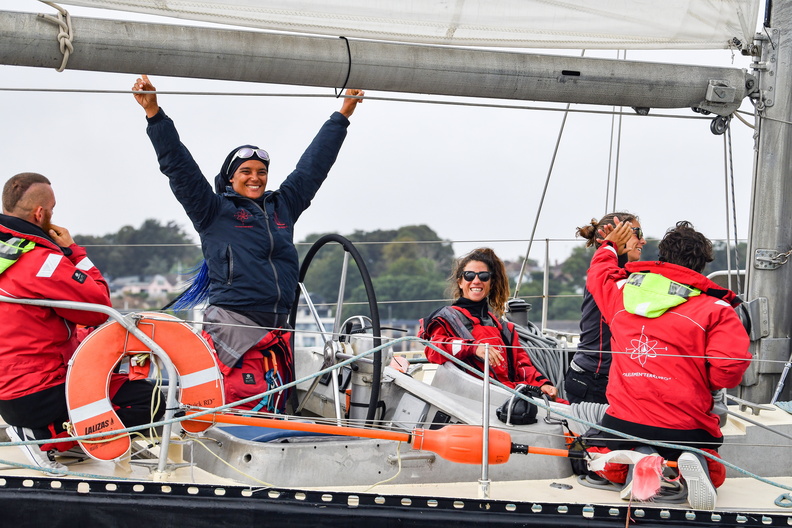 “Usually this is a race with rough conditions, but this was a light air edition and not suited to a 49-year-old, 34 tonne boat, so it was difficult to keep the boat moving all the time. Winning our class was not in the plan, so it is a pleasant surprise, especially finishing on my birthday!” commented Marie Tabarly. “The big picture is that we want to compete in the Ocean Globe Race which is a revival of the first Whitbread. We have to select and train the crew and we need to race a lot of miles. We also have sailors whose goal is to raise public awareness of the major environmental and societal issues of our time.”

Second in IRC One was the all-Danish crew racing Elliott 35 Palby Marine which was the first boat racing under IRC to finish the race. 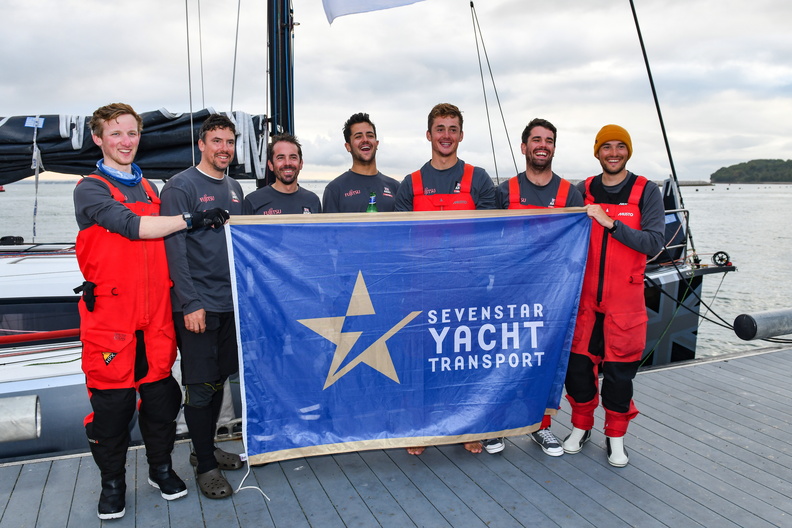 The first fully crewed team to finish the race in IRC Two was the British Army Sailing Association’s Sun Fast 3600 British Soldier. The seven crew are all servicing in the British Army and include skipper Philip Caswell, completing his third race, and Watch Leader Will Naylor completing his fourth race. “On the last day we just about run out of food and more importantly coffee!” smiled Philip Caswell. “This race is a major part of the association’s racing programme. For two of the crew it was their first long offshore race and for all of the crew it is a really good exercise to decompress from active service.”

One of the smallest boats in the race was also competing in IRC Two. Figaro 2 Esprit Scout raced Two-Handed by Marc Dubos with Jean-Luc Schoch finished the race on the 16th day. 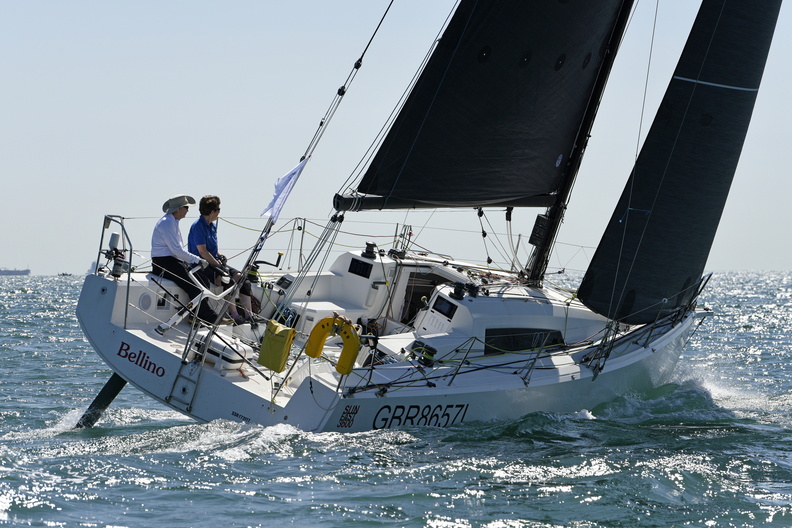 The top six teams in IRC Two were all racing Two-Handed. Bellino, which narrowly missed winning overall was the class winner. Sun Fast 3600 Bellino, raced by Rob Craigie & Deb Fish had an epic battle for the entire race with JPK 1080 Mzungu!. Raced by Sam White and Sam North, Mzungu! suffered from a broken autopilot for several days, but the ‘two Sams’ dug in and finished second in class and third overall. Third in IRC Two was Daniel Jones & Jon Tyrrell racing Sun Fast 3300 Wild Pilgrim, which was also the first Sun Fast 3300 to finish the race.

“We knew from the start that there would be a strong competition with boat-on-boat racing and that was a big reason for entering the race,” commented Bellino’s Deb Fish. “We could see Mzungu! for 95% of the race. In that situation, for every mile you are looking for that extra inch, you have to short tack to stay in pressure or out of bad tide. It was great racing but also stressful; an absolutely cracking race.”

“It’s just about sailing the boat,” said Rob Craigie. “You have to get it going; tweak the sails, set up the instruments and also have fun and enjoy it. This race has been 1,800 miles of close racing at the highest level. All you can ever do is the best you can.”

“We were pleased to get the job done, going through that finish line,” commented Mzungu!’s Sam White. “It was a little disappointing that we didn’t take Line Honours for Double-Handed. As we came up the Solent to the finish we were bow-to-bow, but to have a race like that against Rob and Deb (Bellino) was incredible. We gave our all; there was nothing that we left out there. So, for Bellino to beat us was an outstanding effort too.” 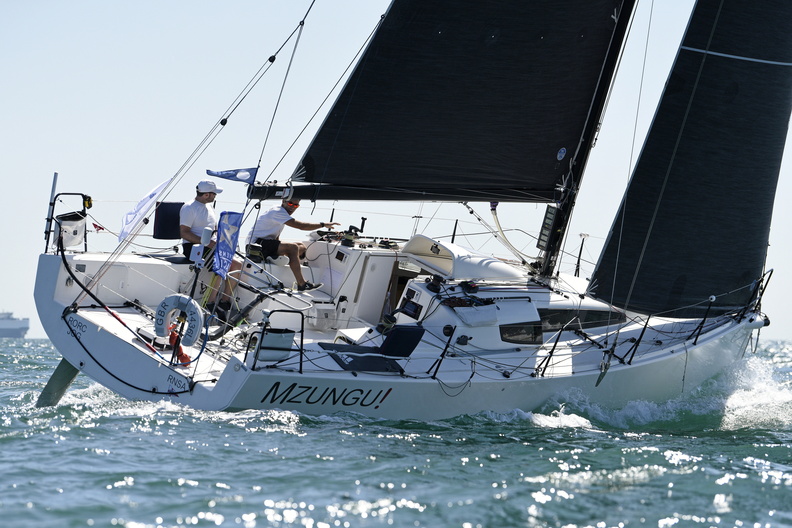 After an epic battle throughout the race, Sam White and Sam North's JPK 1080 Mzungu! finished second in class and third overall © Rick Tomlinson/RORC 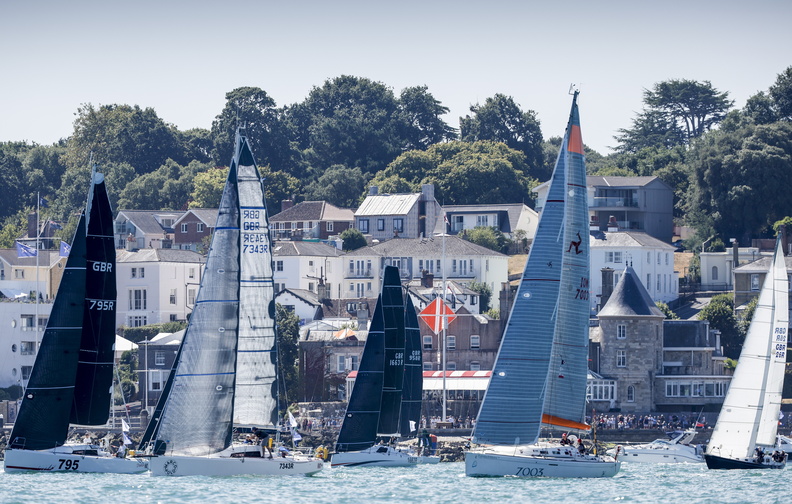 The start of IRC Two and IRC Three from the RYS, Cowes © Paul Wyeth/pwpictures.com

Three totally different boat designs made up the podium for IRC Three. The winner was Richard Palmer’s JPK 1010 Jangada, racing Two-Handed with Rupert Holmes. Designed by Jacques Valer and launched in 2011, Jangada is a modern racer-cruiser. Second was the oldest boat in the race, Stuart Greenfield’s classic S&S 34 Morning After, and third was Charlene Howard’s Sun Odyssey 45 AJ Wanderlust, a fully-fitted out ocean cruiser.

“I brought Morning After back from the dead two years ago and rebuilt her completely with a new rig,” commented Stuart Greenfield. “Once again Morning After has proven that her hull shape is one of the most ultimate upwind performers, even to this day. One of great things about IRC racing is its creativity with different ideas in design and you race different boats. This adds a little bit of flavour and I have added a bit of that to Morning After. We were pushing hard all the way; we never stopped racing.” 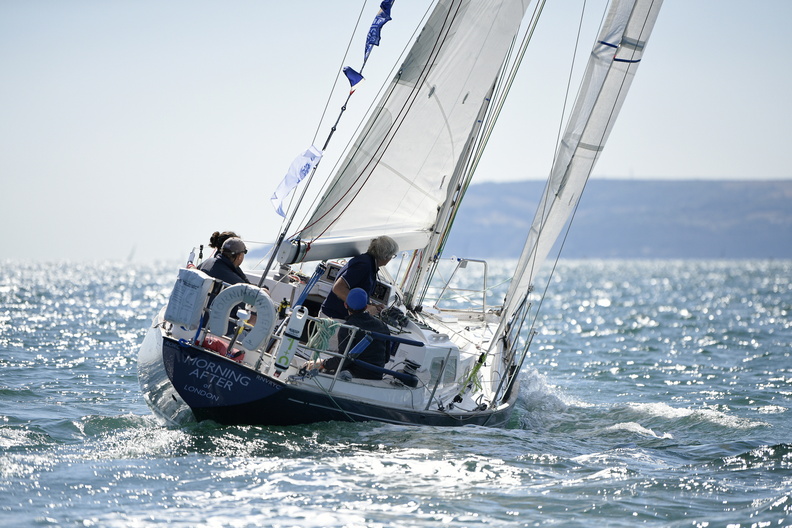 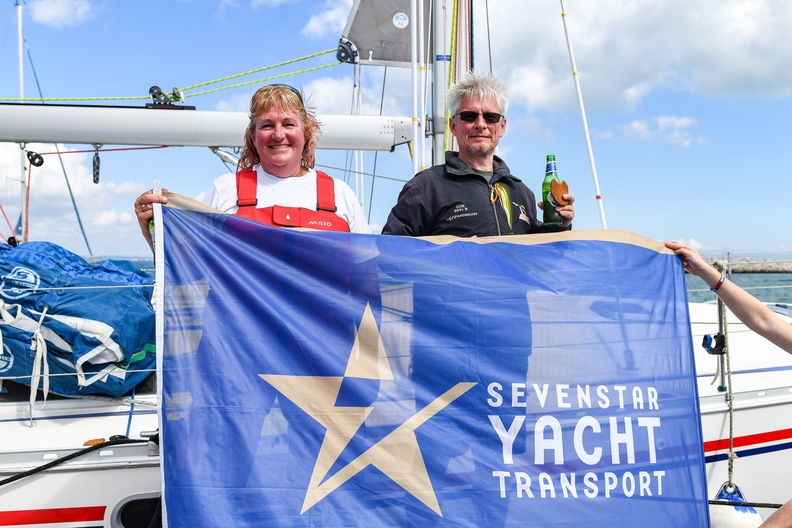 Charlene Howard and Bob Drummond have sailed AJ Wanderlust twice across the Atlantic and this is the second time this year that they have raced around Great Britain and Ireland. AJ Wanderlust’s owner and skipper, Charlene from Michigan USA is the ultimate positive thinker. Charlene absolutely loves time on the ocean.

“As we were finishing I wanted to send a message to the race WhatsApp group saying let’s go for lap two!” joked Charlene Howard. “It was great. We had a bit of competition this time; Morning After and Snifix Dry were with us and Polished Manx until they pulled in for a while due to the weather, but this year we just stayed with it. AJ Wanderlust doesn’t come to races to start, we come to finish. Pitting yourself against nature is a challenge and something you cannot always control.”

The Sevenstar Round Britain & Ireland Race takes place every four years with the next edition due to start in the summer of 2026. Racing with the Royal Ocean Racing Club continues all year and the final race of the RORC Season’s Points Championship is the Cherbourg Race, which will start from Cowes on Friday 2nd of September, which will also be the race one of the Double Handed Nationals.

All the news and results from the race can be found here: http://roundbritainandireland.rorc.org/

Live Blog with photos, video and news from the teams whilst at sea here:https://roundbritainandireland.rorc.org/live