Welcome to the Sevenstar Round Britain and Ireland Race competitors' blog.

Messages from people competing in the race will be displayed here.

Any crew member can email, text message and send pictures to the official Race web site.

N.B. You must follow the instructions in the Notices to Competitors or the system will bounce the email back. You could create a template in your email system to get this right every time. You can send pictures as attachments but only as JPG.

You should be in 3G Range for a good portion of the race, fair sailing!

of a loss over Concise or Corum through the night.

Last night we felt we were suffering a lot without our small spinnaker, but

reaching speeds of 22-23 knots, which is always an adrenaline rush.

After losing a spinnaker yesterday we spent several hours repairing the

sail, which unfortunately failed when we tried to fly it again. In its

place we are using a larger spinnaker, which is less efficient and is

really on its upper limit, but hopefully we can keep a good speed.

Despite the fatigue and time set back, spirits on board are high and we

remain alert for the next potential problem. The multitasking nature of

with working as sailmakers mid-race, this morning I was given the

making the turn south, though what will come will be heavy upwind and

reaching conditions, more suitable for both Corum and Concise. So it’s

Wind has been up and down to 29 knots and front is passing overhead... getting wet whilst I type this!  Glad to be going down wind and gave a seal a right fright earlier when we came down on him at 20 knots with A4 and full main.  Steadied back a bit now to A5 with 1 reef as it was getting a bit hairy.

Nice not not to be hiking and we’re all getting exercise grinding instead.  Will Harris is being a hero on the Nav with every shift correctly called. 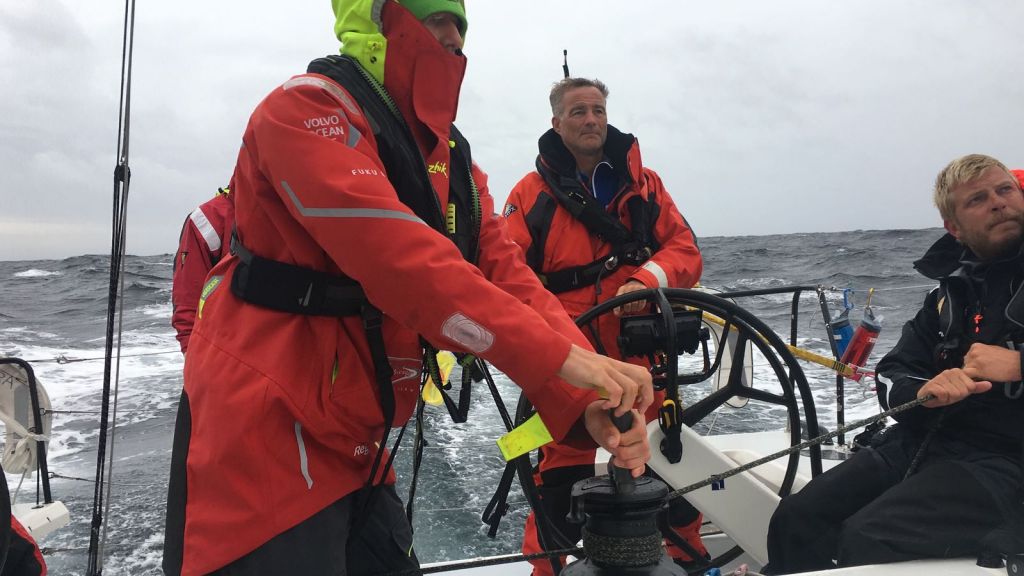 A message from St Kilda

night. We dropped the kite due to gusts of 30Knts where it was just

the night hours under J2. This morning though, our hoist of the A5

went bad and we lost it to the sea, but luckily no damage to the boat

We've just set the A4 kite (carefully!) and have now set off at about

11 knots towards the top. Sun is shining and at last we have a chance

to dry the boat out.

Seeing St Kilda up close was really quite special and here is a photo for you. 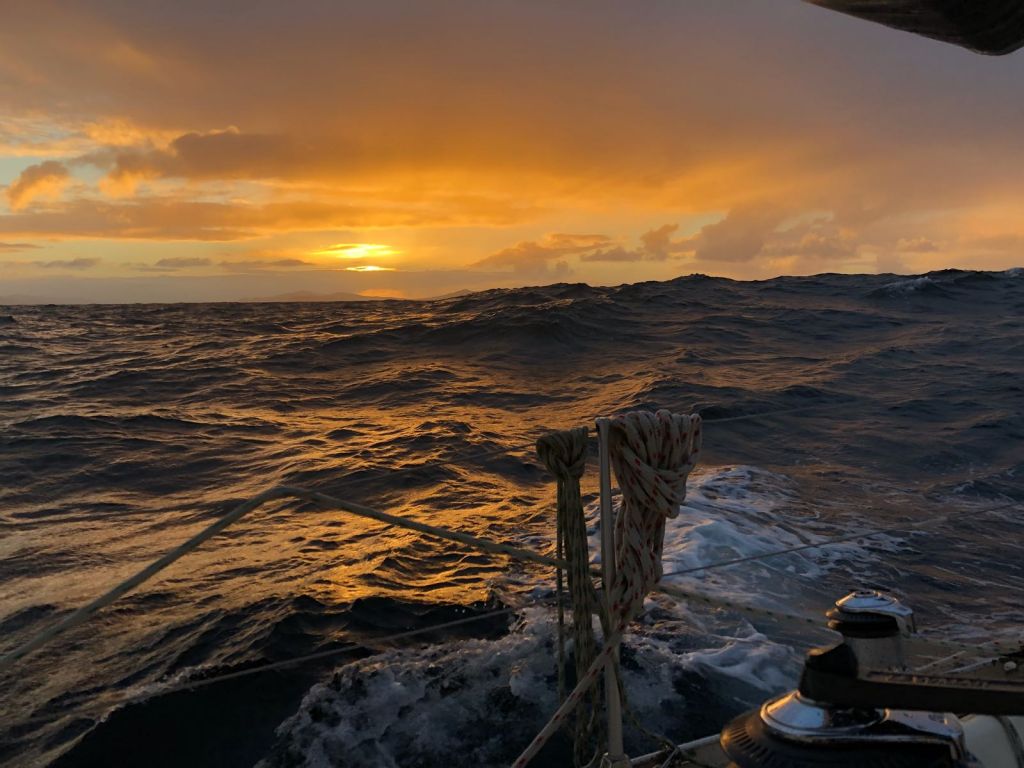 South west coast of Ireland this morning from Tantrum

all went on deck to make the change, the boat buried its bow in a wave and

the front of the spinnaker tore off completely. This then ripped off the

edge of the sail from top to bottom, which is a massive disappointment.

Fortunately everyone jumped on the situation positively to try and repair

it. The boat turned into a sail loft, with tape and glue absolutely

everywhere. The boys did a really good job and we hope to fly the repaired

kite very soon. Though I am confident that it will hold, you just never

much, judging by the speeds of Corum I think their spinnaker also broke.

The whole question will be on whether this spinnaker will hold together.

straight away, it has been a good team building exercise! Phil.

Gutted to pull out with a rudder issue. Which has left us with a damaged rudder bracket. We’ve decided to cut our losses and not risk making a small problem a big problem with the Route du Rhum fast approaching. What a great few days pushing the boat with these 2 guys though!!

Too bad these two days with these 2 were exciting! - Sam Goodchild 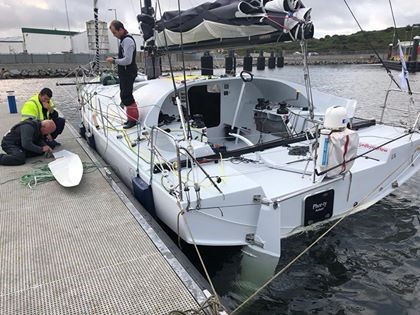 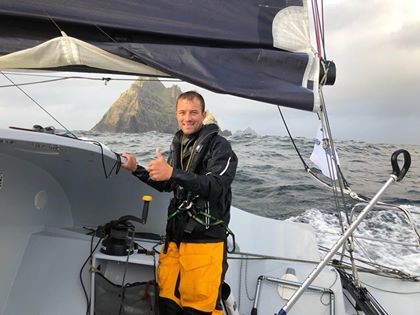 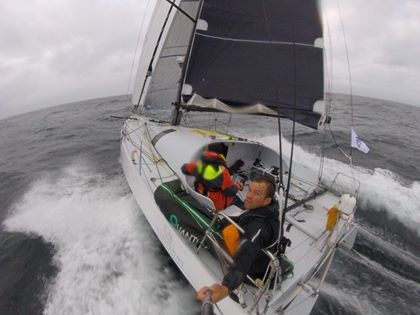 Conditions are getting quite crazy out here…

front in the low pressure. We just had a sustained surf of 22 knots which

lasted a good 30 seconds with the boat absolutely screaming. This is really

the limit for the spinnaker, and we will probably change down soon to the

Code 5 furling sail if it gets any winder.

It was a great feeling last night to take the lead, but sorry to hear that

Phor-ty has had to stop earlier today, we were enjoying the battle, and not

too sure why Corum have slowed, but fingers crossed they will be up and

In the meantime we have some breathing space, but we are all too aware of

how many twists and challenges could lie ahead, so we will continue to race 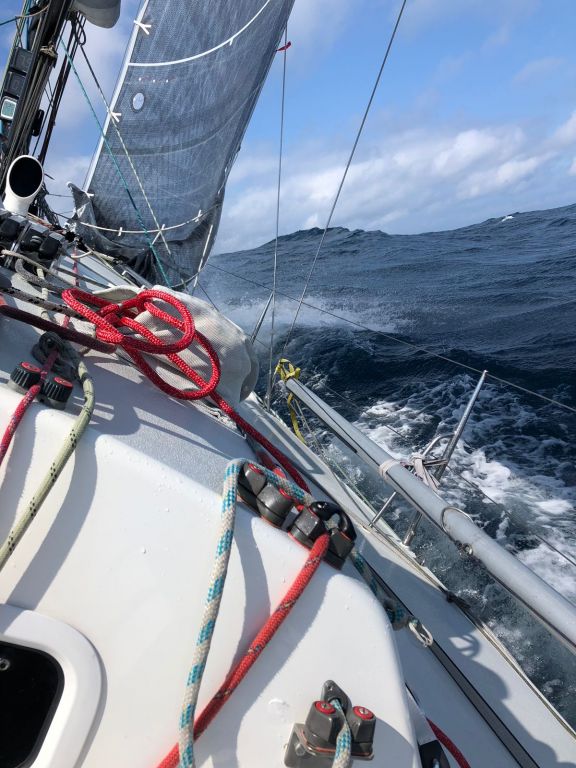 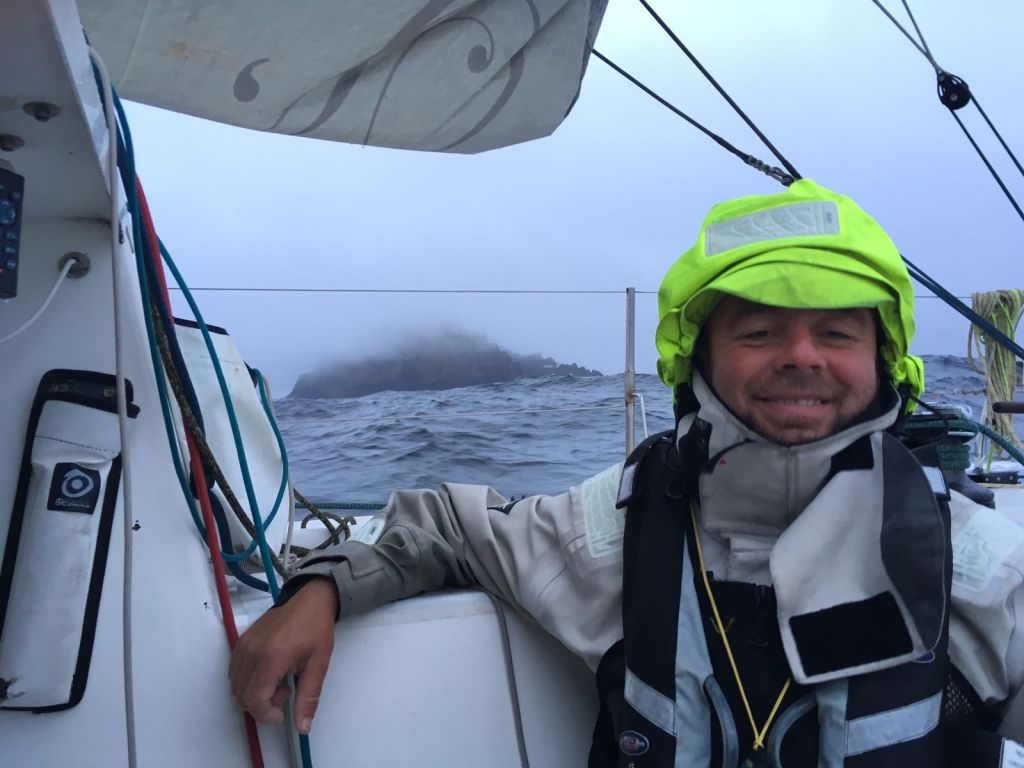 I am hugely disappointed, as are the rest of the crew, that we had to retire but wanted to say a massive “thank-you” to all of the RORC team for their efforts in preparing and administering the race.

We are all loving your social media updates, as are all of our family and friends, and will continue to monitor the teams progress.

Best wishes to you all and thank you

So here we are once again, eating. Something that seems to go ‘hand in hand’ with any racing we undertake!

Having succumbed to the problems we encountered on Day One of our epic race we have now repaired the problem and found ourselves instead sailing to Guernsey. Here we thought it appropriate, having eaten all of our food through to Day Five already, to find a Resteraunt where we could enjoy potatoes to honour our colleagues still racing along the West Coast of Ireland. We have enjoyed chipped, boiled, sautéed and creamed potatoes and lots of fine French wine! Now the original plan for us all, to loose weight whilst racing, seems to have backfired and my waiste band is struggling more than when the race started!

We are loving watching the race updates and wish you all a safe passage through the weather ahead but for now I must dash as someone has opened another bottle of red and is passing round the cheese board and if I’m not quick I will miss out.

Firstly apologies for the lack of updates but we have had some problems getting our satellite data connection working. Likely only sporadic updates going forward but lets see.

Its currently 3.30PM Tuesday, and we are 50 miles into the Irish Sea heading for Bull Rock and rounding the S/W tip of the Emerald Isle. Hard on the wind in 20knots, sun shining with Ollie on the helm. Somewhat tough to type this out, with laptop on knees, legs braced in the nav station with the boat at a 30 degree angle and slamming waves !!! The life of a OBR (On Board Reporter).

The start feels like a distant memory now. It was great to have the Virgin Media Business team, our partners and people from Scope Charity chartering a very big spectator boat to follow us pre and post start. Big thank you to everyone that came along and hope you had a fab experience. Thank goodness we didn't disappoint with a great start fighting it out at the front. Our 3600 match race started immediatley as we were hot on Bam's tail out of the Solent. We managed to get back in front before St Caths !! Hooray....only 1780 miles more to duke it out....

The two days of sailing along the southern coast have been hard work. Sea state has been short and choppy, pushing us all over the place and making any task hard work. Ollie has been battling with some sea sickness but hopefully now getting through it - or is it my cooking ??

We are certainly racing very hard with same intensity as a weekend offshore. We managed to download weather at the Scilly's on 3G but had no time to check the Yellow Brick for our position. Our two Sunfast 3600 competitors have been popping up every so often on AIS. That said we have not seen Tigris for a day or so. Bam was two miles back at the Scilly's but look to go south of the Southern TSS whilst we threaded North. They didn't appear as left the Scilly's so not sure where they are currently or if that route paid off.

4 years ago we spent a great deal of the race close to Scarlet Oyster....and 4 years later we are close to them again. They got away across Lyme Bay but managed to get back close to them by the Scilly's. Trying to hang on to them and stay with the bigger class.

Anyway time to relieve Ollie after my 2 hour offwatch, we got a race to win/ do well at !!. 115 miles to Ireland and when we may be able to crack the sheets and get the boat level for a while. Then we count down to Friday and the bad weather forecast off Norther Scotland - I hope we wont need to take shelter again on Lewis. 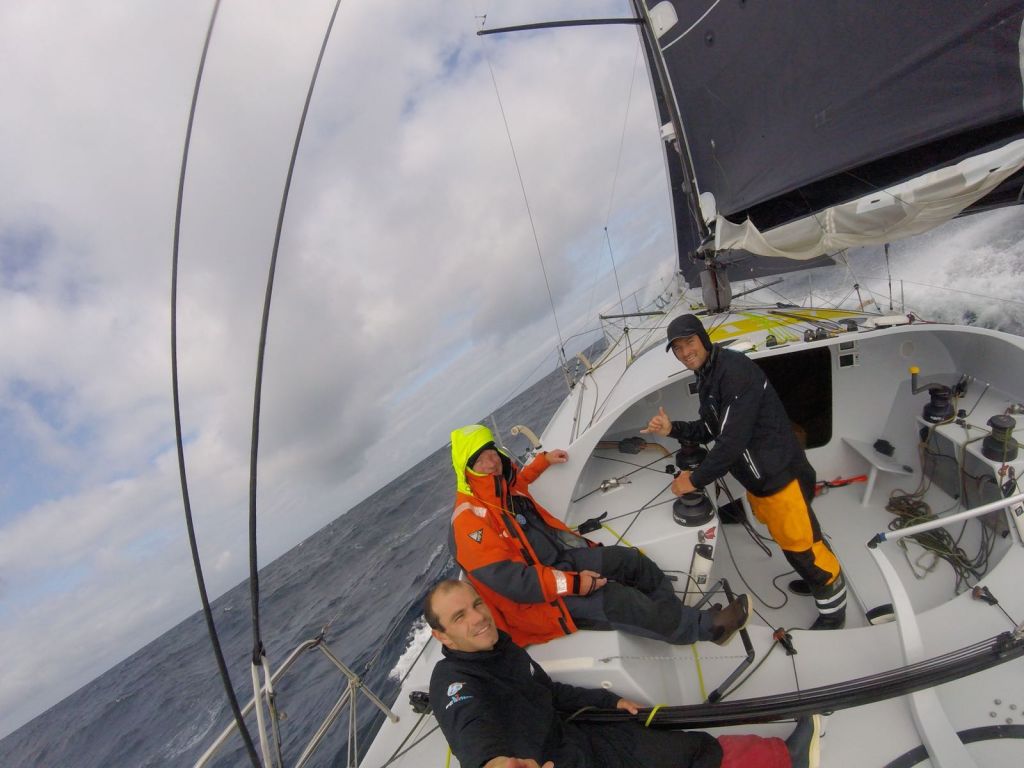 Phor-ty approaching SW Ireland and looking forward to bearing away. 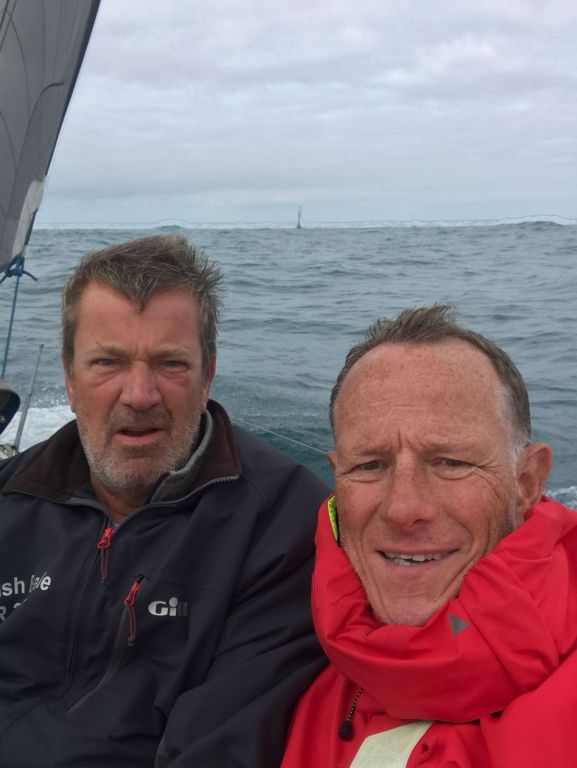 grey Celtic sea, playing the shifts as we battle against headwinds trying to

seek out any advantage on Corum. As it happened we took different

strategies, but it all came together early this morning on different tacks,

with exactly the same distance as before... evidently it will be hard to

shake them off! Particularly today where we will have quite strong beam

reaching conditions which is the Mach 3âs sweet spot. We will be saving our

energy instead for tonight, and the strong downwind forecast as we head

towards the approaching depression NW of Ireland. Here the sailing will

âWe had a visit from a snipe last night, the long thin fish with the sharp

beaks - which wanted a bit of Class 40 action and jumped on board. Funnily

sandwiches onboard, so luckily for him he got returned to the water.

âToday will be about damage minimisation against Corum, and then we are all 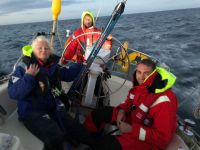 Half of Team Tantrum starting the night shift

Nothing like some wind and rain to see us off, and weâre expecting some

very quick yesterday afternoon in the close reaching, and over the night we

working hard to reel them in until they were alongside us this morning. So

we felt like weâd earnt a good porridge for breakfast.

rhythm. As navigator I am floating between the watches, which has the

penalty that there is never a bunk spare, as we only have one on the high

side. So sleep is currently in short bursts, waking up with cramp after

being folded up in an awkward position. Class 40âs arenât so famous for

âNext stop â the Scilly Isles, and then itâs upwind to Irelandâ¦ as usual! â